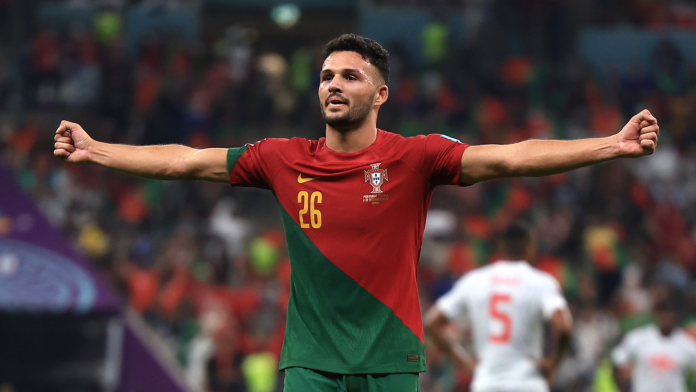 Doha: Portugal’s hat-trick hero Goncalo Ramos said he had not even dreamt of starting a World Cup knockout match, let alone scoring three in his first start in the tournament.

The 21-year-old striker was handed a surprise start ahead of five-times Ballon d’Or winner Cristiano Ronaldo and rewarded coach Fernando Santos with a brilliant match-winning display.

“Not even in my wildest dreams did I think of making my first start in a World Cup knockout game and scoring three goals,” he said.

“But we have to think game by game and prepare for the game (quarter-final with Morocco). This result doesn’t matter now. We’re going to go all out in the next game.”

Ramos was only two years old when Ronaldo made his debut for Portugal and has often spoken of his admiration for the 37-year-old.

The man of the match at the Lusail Stadium was asked how the dressing room — and Ronaldo — had reacted to the surprise team selection from Santos.

“Honestly no one in the team talked about it. Cristiano, as captain, did what he does, he helped, he talked to us, not only to myself but to my teammates,” he said.

“Cristiano Ronaldo has always been a role model, he is an idol for many. I also like (Robert) Lewandowski and (Zlatan) Ibrahimovic,” he added

Ramos was only making his fourth appearance for the national side, having played ten minutes across two games in the group stage.

He only made his debut on November 17 in a pre-World Cup friendly against Nigeria, coming on as a 67th-minute substitute and promptly scoring 15 minutes later with the
the fourth goal in a 4-0 win.

Born in Algarve, the forward has burst onto the scene with Benfica this season after being given an enhanced role as the central striker following the sale of Darwin Nunez to
Liverpool.

He has scored 14 goals in 21 games in all competitions, quickly adjusting to his new role.

“My favourite position is forward, but last year I was asked to play in support of Darwin. It’s clear that with his departure a space opened up for me. It’s great to now have the role that I love the most,” he said in a recent interview.

Should he continue his impressive impact on this Portugal side in the quarter-final against Morocco he would surely find himself a target of the same kind of big-money approach that
saw Nunez leave.

But for now, his thoughts are purely on contributing to Santos’ increasingly impressive side and he isn’t even taking his starting role for granted.

“That is something that doesn’t concern me. I always work to the fullest and hopefully that is evident,” he said.