Are we facing social collapse? 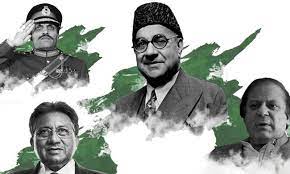 Politicians in Pakistan are portrayed as incompetent, corrupt, useless, and illiterate, who have no skills and expertise to run the country. The 1973 Constitution is considered trash and a piece of paper that can anytime be thrown in a dustbin. This is the perception that has been crafted with tireless efforts since the orphaned parliamentary system was launched in Pakistan. I joined active journalism in 1987 when Amir al-Mu’minin Ziaul Haq was running the Emirate of the Islamic Republic of Pakistan, according to himself, and had already destroyed the Pakistan people’s Party (PPP) whose founder Zulfikar Ali Bhutto had already hanged to death in Rawalpindi jail. Last week I attended a cake-cutting event for the 55th Anniversary of PPP where loud slogans of “Jeeay Bhutto” (Long live Bhutto) and Kal bi Bhutto Zinda tha —Aaj bi Bhutto Zinda Hai (Bhutto was alive yesterday, Bhutto is alive today) could be heard. Thousands of followers of Bhutto visit every year his grave where he was buried at midnight in 1979 by men in uniform under strict security and nobody within his family being allowed to see his face.

I witnessed the arrival of his daughter, Benazir Bhutto, in Lahore on April 10, 1985, when almost a million followers welcomed her at the old Airport of Lahore and the tail of her procession was at Government College Lahore intersection, and this 11 km journey she finished in 14 hours. I reported her rise as Prime Minister twice, I reported the aftermath of her assassination in Liaqat Bagh Rawalpindi on December 27, 2007 (aged 54), and I also reported the coming back of PPP again in power without her.

The PPP faced the brunt of two army dictators for over 45 years but still has the provincial government of Sindh.

The 1985 partyless general elections of Ziaul Haq gave birth to a new cadre of politicians, and one of them is Mian Nawaz Sharif. I reported his rise with the help of Lt Gen Hameed Gul and Gen Ziaul Haq and I also reported his arrest by the Chief Executive of Pakistan Gen Musharraf, and the termination of government twice. He rose again as Prime Minister and then he became a victim of “project Imran Khan”, but I again reported the coming back of his party into power this April.

He was compelled to leave his country by Musharraf with a commitment that he would not come back for the next 10 years. Mian Nawaz Sharif faced the brunt of many military generals but he kept surviving in politics and neither the iron-fisted Musharraf nor Shukria Raheel Sharif could end his political career. Even the Bajwa Doctrine failed and the so-called illiterate, corrupt, and incompetent politician reclaimed his place within the system.

The major factors of collapse reported by anthropologists, historians, and sociologists are environmental change, depletion of resources, loss of cultural identity, the downfall of the government, rise of violence, unsustainable complexity, invasion, disease, decay of social cohesion, rising inequality, intolerance, a decline of cognitive abilities, loss of creativity, and misfortune. Here I leave it to my readers to make a list of how many of the above-mentioned factors we can find today in Pakistani society.

Now we have come to know that the military has decided to stay away from politics. I receive this news with certain reservations and will keep my fingers crossed. It is very difficult to hand over Empire so easily to someone you consider incompetent, useless, corrupt, and illiterate. I believe that this decision of staying away from political power can be a tactical retreat but not a firm decision.

I fear that thousands of political cronies, hundreds of powerful families, and dozens of living legends from the ex-servicemen cadre would continue to advise and beg military leadership to stay in the political arena because this is their biggest source of honour, bread, and butter. Anyhow it is too early to say anything about what role the military will opt for under the unusual circumstances it is going through.

A country that is facing implosion due to unskilled youth, depleting natural resources, economic and natural disasters, incompetent and politically motivated bureaucracy, and greedy politicians is difficult to pull out from possible economic and administrative collapse. Cosmetic performance would not help now and neither military nor civilian leadership can work in the moral vacuum that has been created by the PTI cadre. Mutual respect among social groups eroded by “project Imran” must be reclaimed as soon as possible if we really want to avert social collapse.

For this purpose, offering economic, social, and moral accountability by powerful groups is strongly needed. We must accept that the mantra of “accountability of politicians” has now surpassed our youth and is demanding accountability of everybody regardless of social status and the notion of the sacred cow has been rejected by a new generation.

A number of anthropologists believe that cultures reboot every 70 years. Although there is no firm and tested theory in favour of this notion, we have seen in history that culture reboot is not so unfounded. Now Pakistani society has completed this 70-year phase after independence and we have already celebrated the 75th Independence Day.

Supporters of this “70-year reboot” there is a revolution of some sort going through silently in every society. The founding and second generation generally lived through the experience that shaped them which led them to create a cultural system to respond to that situation. Since that experience was real for the first two generations, they can pass those ideas to the third. However, the great-grandchildren of the founding generation are sceptical of this system, question and challenge it, and seek to reboot it for the new conditions they face. This reboot phase is usually turbulent, and dangerous but natural. The level of turbulence is directly related to levels of economic and environmental degradation, demographic imbalance, and imbalance in the distribution of resources among groups. Unfortunately, all these factors are much higher than normal in Pakistan so turbulence during a “70-year reboot” would be greater and quite unpleasant. Nobody can predict the future with full confidence but we can make general cultural predictions by looking at general circumstances and what cultures do. This doesn’t mean that we can make specific predictions about the future but rather that general social trends can point us to things that we can expect in the future.

Honestly speaking, we do not find any nation that has not gone through this societal collapse at least once in its lifetime. Anthropologists say that a collapsed society may revert to a more primitive state, be absorbed into a stronger society, or completely disappear. They also believe that societal collapse is generally quick but rarely abrupt.

The major factors of collapse reported by anthropologists, historians, and sociologists are environmental change, depletion of resources, loss of cultural identity, the downfall of the government, rise of violence, unsustainable complexity, invasion, disease, decay of social cohesion, rising inequality, intolerance, a decline of cognitive abilities, loss of creativity, and misfortune. Here I leave it to my readers to make a list of how many of the above-mentioned factors we can find today in Pakistani society.