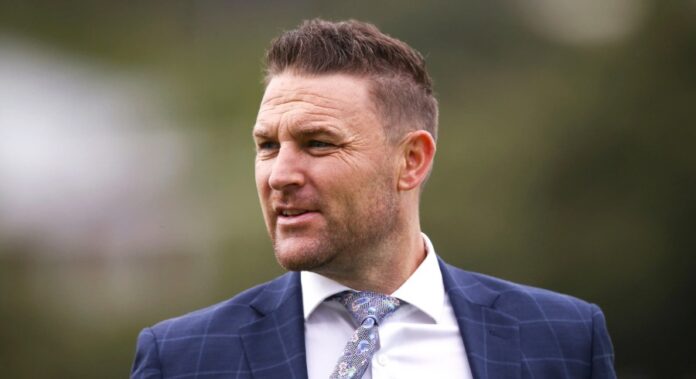 RAWALPINDI: England head coach Brendon McCullum said on Monday that England would be trying to play an aggressive brand of cricket against Pakistan in the three-match Test series to entertain people.

The England team arrived in Pakistan on Saturday after their Test camp at the Abu Dhabi Cricket and Sports Hub. This is England’s first visit to Pakistan in 17 years to play a Test
series. The first Test starts in Rawalpindi on Thursday.

“One of the things we try and do is to respect the conditions but at the same time if we are given the opportunity to try and play aggressive and attacking cricket then we’ll try and take that option,” he told media here at a news conference.

“It’s authentic to the line-up that we’ve. That’s how the guys who are in our squad play and that is what gives them the most freedom and best opportunity to perform at the highest level. We know it might not be as prominent aggressive cricket as we’ve seen in the past but there will be opportunities to try and play positively. I expect our guys to take on those opportunities.

He noted that Test cricket was not as popular as it used to be in the past hence it was necessary to make red-ball cricket entertaining and exciting. “We see an obligation that if people turn on the TV anywhere around the world or they pay their money to come and watch you play that they head away somewhat entertained. For us it’s about trying to play that style. We know it is not always going to be successful. What we have seen over a short period of time is it can unlock your skill.

“If we’re trying to put a positive slant on the style of play then it allows the talent to come out. That is what we believe. We have had some success in the recent history with it. I expect us to still play positively given the opportunities.”

According to McCullum, winning away from home was the biggest accomplishment one could achieve as a Test player and as a Test team. “We understand the size of the challenge in front of us. But that’s great. That’s why you want to play the game. You don’t want easy challenges, you want to take on the best in their own conditions and you want to try and test where you’re at as a side. I’m really excited.

“The boys [too] have already said they’re pretty excited about playing in front of a full house here. That’s what we want from red-ball cricket all around the world, stadiums packed out and fans getting behind their local team.”

To a question about Pakistan pacer Shaheen Shah Afridi, was ruled out due to a knee injury, he said his absence was a big loss for Pakistan.

“I know him pretty well. I played many years in the PSL [Pakistan Super League] with Shaheen as well. He’s a wonderful bowler and he’s turned into a fine leader as well. He’s a big loss, no doubt.

“But one thing when you play against Pakistan, you look at their team and you see talent. And you see some that might not be developed talent but it’s talent. You need to respect that and you need to find a way to be able to be well-researched and well-planned about what’s going to come at you, but also try and find out a way to put that talent under pressure and see how it responds.”

He said Pakistan was a very good squad it would be tough challenge to face it. “It’s well-rounded. It’s got some experience and some youth, in both batting and bowling….We know we’ll have to play well if we are going to be successful.”

He said Pakistan was a great country to visit and its people were really hospitable. “This is obviously a great place to tour. It’s been starved of international cricket for a long period of time. We understand how passionate people are here in Pakistan about this form of cricket and we understand the obligation that we have as an England side and we are looking forward to coming over here and playing an entertaining style of cricket which hopefully ends up in results, whether that’s in our favour or in Pakistan’s favour.

Meanwhile, both teams took part in batting, bowling and fielding sessions at the Pindi Cricket Stadium.