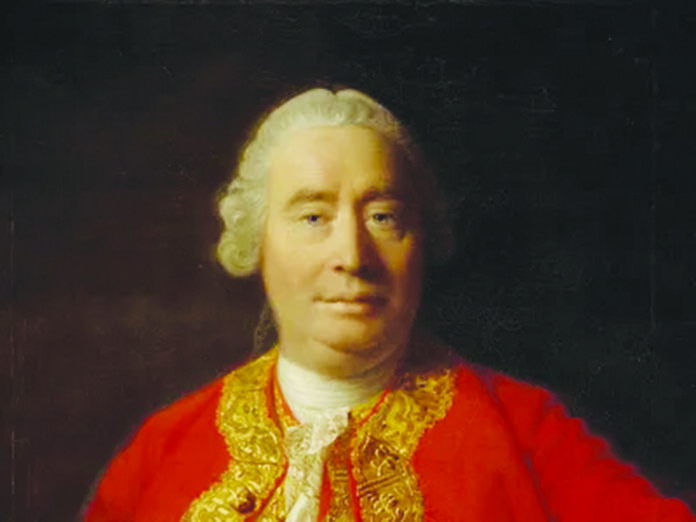 David Hume’s best-known contribution to philosophy is his scepticism, which is unique even in the sceptical tradition. No doubt possessing first rate intelligence, Hume was probably the first to realize that extending the absence of any correlation between cause and effect (even if he was justified in making the assertion) to enunciate scepticism about God was shoddy thinking at best. For surely, he was too intelligent not to realize that God – at any rate the God believed in by sensible souls – could hardly be dependent on the cause-effect mechanism in order to create or run the universe. The smart money therefore is on Hume being perfectly aware that God could not be ruled out by his rejection of cause and effect, even if the latter is accepted in toto.

How sincere Hume was when he made the extension is a moot point anyway. What is of infinitely more importance is the fact that most atheists consider the argument to be good enough to have effectively ended the God debate once for all – Mission accomplished! If their discomfiture (bordering on panic) is any indication, many theists also consider it a pretty serious challenge to the continuation of their belief in God. If only these atheists and theists had any idea what they were talking about! It is certainly not the first time in history that a bad argument has enjoyed widespread popularity owing to the philosophical incompetence of the public.

The problem with ‘debunking’ the ‘First Cause’ argument (as Hume is widely regarded to have done) is that the original argument itself is representative of a group of extremely poor demonstrations for the ‘existence’ of God. This was clearly shown to be so at least eight hundred years ago, if not earlier. But tired old philosophical ideas have this way of being recycled every few years, with each new generation thinking how fresh and brilliant they are. Here, in short, is what is wrong with it: Like other ‘logical’ arguments that propose to demonstrate the ‘existence’ of God, the ‘First Cause’ argument suffers from the fatal drawback that it places God inside the scheme of things (time and space). Consequently, instead of answering the question of the existence (cause) of the universe, the ‘explanation’ merely shifts the question one step back. For it immediately invites a (quite logical) question in return, namely, the ‘existence’ of God – or God’s cause. Bertrand Russell fondly acknowledged in his autobiography the debt he owed to John Stuart Mill, from whom he had learned to deal with the persistent, irksome question, ‘Who created you?’ That is, asking in return, ‘Who created God?’ Russell was not averse to having fun at the expense of the theists, although he too was far too intelligent to have genuinely believed it to be a valid retort.

The problem with ‘debunking’ the ‘First Cause’ argument (as Hume is widely regarded to have done) is that the original argument itself is representative of a group of extremely poor demonstrations for the ‘existence’ of God.

Returning to Hume and why his rejection of cause-effect is not good enough for his purposes, in no sensible world view is God obliged to operate on the basis of the cause-effect correlation – or any other mode or mechanism for that matter. Considering God’s acts to be subject to any such mechanism already in place is to regard God as just another entity in space-time subject to the laws of the universe; and not as the Creator of those very laws, and therefore beyond their jurisdiction. Any discussion that starts from the point of considering God to be like anything else in the universe is bound to be a non-starter, if even one of the parties in the exchange is interested in a sensible discourse.

Francis Bacon had a point when in 1625 he famously observed that a little philosophy inclined man’s mind to atheism, but that depth in philosophy brought men’s minds back to religion. It is neither those unsophisticated theists that have no time or patience for fancy philosophising, or those on the opposite extreme of the spectrum that are well-versed in philosophy, who feel threatened by the teachings of Hume and others like him. Instead, it is those theists that have read just enough philosophy to have doubts stirred up in their minds but not thoroughly enough to think their thoughts through, that feel themselves obliged to choose between burying their heads in the sand or throwing in the towel in response to what feels to them like the overwhelming power of such arguments. It is for precisely this reason that Alexander Pope, three hundred years ago, warned against ‘a little learning’ in these immortal words:

A little learning is a dangerous thing;

Drink deep, or taste not the Pierian spring:

There shallow draughts intoxicate the brain,

And drinking largely sobers us again.