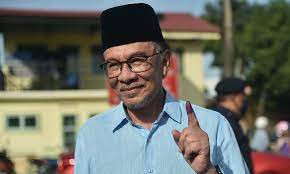 The ceremony at the palace closes the chapter on one of the most dramatic elections in Malaysia’s history, after no party managed to secure a majority to form a parliament for the first time since independence in 1957.

“I, Anwar Ibrahim, after being appointed to hold the position of prime minister, solemnly swear that I will honestly fulfil that duty with all my efforts and that I will devote my true loyalty to Malaysia,” the 75-year-old said while dressed in traditional Malaysian clothing.

In the capital Kuala Lumpur, Anwar’s supporters were in a celebratory mood.

December 9, 2022
New COAS Gen Asim Munir has now visited both the Western and eastern borders of the country in his first visits after taking charge...