The Bretton Woods institutions must also change their neoliberal bias 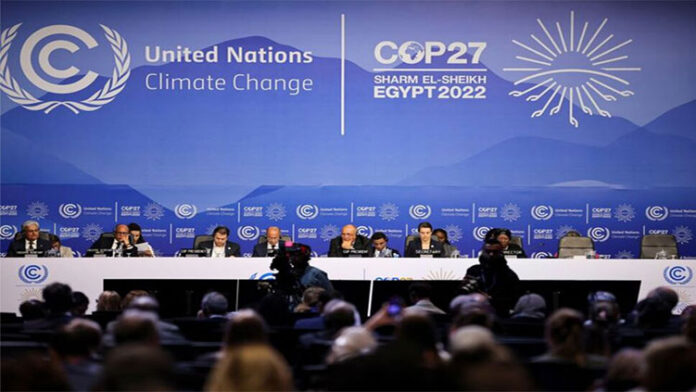 ‘The rich world’s governments arrived at the conference in Egypt saying “it’s now or never”. They left saying “how about never?”. We sail through every target and objective, red line and promised restraint towards a future in which the possibility of anyone’s existence starts to dwindle towards zero. Every life is a madly improbable gift. For how much longer will we sit and watch while our governments throw it all away?’ – An excerpt from a recent Guardian published article ‘Our leaders had a final chance to halt climate breakdown. They failed each and every one of us’ by George Monbiot

The COP27 Summit, which was held in Sharm el-Sheikh, Egypt, from November 7-18 has overall not lived up to the enormous and perhaps most urgent  challenge at hand, and that is tackling the fast unfolding climate change crisis, both in terms of mitigation and adaptation through shifting towards green economies, but also rich countries with much higher carbon footprints, paying reparations to developing countries like Pakistan, with relatively miniscule carbon footprint, but which have suffered climate change-induced disaster; where catastrophic floods this year in Pakistan inundated one-third of the country, led to the loss of more than 1700 lives, and an estimate damage worth $30 billion.

Having said that, over the years the rich countries have not lived up even to their climate finance-related commitments, where a recent article ‘The Barbadian proposal turning heads at COP27’ published by Financial Policy (FP) pointed out in this regard ‘A perennial question hanging over U.N. climate conferences is how developing countries will finance their domestic climate mitigation and adaptation efforts. Rich countries currently provide them with a little less than $100 billion per year in a combination of grants and loans for this purpose, but their annual need is widely understood to be in the trillions of dollars. Developing countries have contributed far less to climate change than wealthy ones – but disproportionally bear the brunt of its effects.’

Hence, while it is all very well talking about innovative solutions to move towards renewable energy, sucking out carbon from the atmosphere, and managing the water sector much better; among other issues, the other main thing is arranging finances. A recent Project Syndicate (PS) article pointed out in this regard ‘If there is one issue that has taken center stage at this year’s United Nations Climate Change Conference (COP27), it is money. Delegates, climate activists, and the rapidly increasing number of private-sector attendees are discussing who should pay for climate change, and how. The focus on money is past due. While the annual climate talks are ultimately about cutting greenhouse-gas pollution, the transition to a net-zero economy requires massive financing, as will adapting to a world of rising average temperatures and sea levels, increasingly frequent and severe extreme weather, and all the other costly effects of burning fossil fuels.’

With regard to moving towards a meaningful financial plan, and the needed economic environment, including reforms of the Bretton Woods institutions away from neoliberal- and overly austerity–  mindset, in addition to rich countries being asked to come good on their commitment of providing $100 billion to developing countries by 2020– there has been some progress,  although much greater breakthroughs were needed, especially after a lukewarm COP26 Summit in Glasgow, Scotland last year in this regard.

There has been some movement on the ‘Loss and Damage’ fund, and wider acceptance of taking forward a meaningful financial and economic policy plan with regard to dealing with climate change crisis in the shape of ‘the Barbadian Initiative’ put forward earlier in the summer, and evolved thereafter, under the able leadership of Barbadian Prime Minister Mia Mottley.

Hence, there has been some movement on the ‘Loss and Damage’ fund, and wider acceptance of taking forward a meaningful financial and economic policy plan with regard to dealing with climate change crisis in the shape of ‘the Barbadian Initiative’ put forward earlier in the summer, and evolved thereafter, under the able leadership of Barbadian Prime Minister Mia Mottley.

Indicating about the ‘The Barbadian Initiative’ the same FP published article pointed out ‘Mottley and Persaud spent the past year developing their Glasgow pitch into a more solid proposal and workshopped it at a July meeting in the Barbadian capital of Bridgetown with academics, IMF executives, and the U.N. deputy secretary-general. The document that emerged from these discussions– dubbed the Bridgetown Initiative– made a one-time $650 billion request of the IMF (a departure from Mottley’s original suggestion that this amount be paid annually) and called for development banks to issue $1 trillion in low-interest loans for climate spending in developing countries. …An updated version of the Bridgetown Initiative that Persaud published this week also advocates for a tax on oil companies to finance reconstruction grants that would be dispensed to developing countries after climate disasters, though it did not specify how exactly this would work. Persaud also wrote that countries’ outstanding loan repayments should be temporarily paused after such disasters.’

Although developments with regard to the establishment of a ‘Loss and Damage’ fund have indeed been encouraging, given that the EU proposed this on early Friday, there is a long way to go in this regard, as pointed out by Guardian’s environment editor, Fiona Harvey, in her recent article ‘Second draft of COP27 text: what has changed since the first draft?’ She highlighted both where the COP27 stood on this fund, and also with regard to some other main issues as follows: ‘There is still a commitment to phase down coal power, but the wider commitment to a phase down of all fossil fuels sought by India and others has been taken out. On the 1.5C temperature limit, many countries were hoping for much stronger language that would reflect the advances made at Cop26 in Glasgow last year to “keep 1.5C alive”. And on loss and damage– the vexed issue of how to provide financial assistance to poor countries suffering the worst ravages of climate breakdown– there is little of substance because countries are still fiercely debating the possibility of a new fund, proposed by the EU in the early hours of Friday. This text has a long way to go, and while the tightening that has been done by the Egyptian hosts is welcome, the lack of substantial commitments and forthright language in some key areas will disappoint many.’