The voices are saying that Arabs are people too 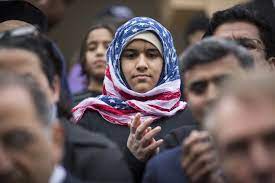 In 2020, I published “Arab Voices: What They Are Saying to Us and Why It Matters.” Based on our polling during the first decade of this new century, “Arab Voices” was an effort to lay out the myths that have shaped Western discourse about the Arab World, understand why those myths have taken hold, and what can be done to dispel them.

In separate chapters, “Arab Voices” presented a number of these myths— e.g., “Arabs are more violent and tend toward extremism,” “Arabs hate the West,” etc.— and then demonstrated through our extensive polling of Arab public opinion how each of them was a misperception of the real Arab World. The book concluded with practical lessons for governments, businesses, educators, and the general public to be able to take corrective measures and work to promote better understanding.

What we found pointedly in our polling in the USA and in Europe was that Western perceptions of the Arab world were too often shaped by negative stereotypes and anecdotal evidence used to justify prejudicial views. As a result, our understanding of who Arabs are, and what values and aspirations they have, too often missed the mark.

Policymakers and political analysts, alike, often talk about Arabs and at Arabs, but they rarely consider listening to Arabs in order to fully understand their lives, and their needs and hopes for the future. One consequence of this has been the oversimplification of a complex region, which has led to costly policy disasters.

More than a decade later, not only the myths persist but with them, and because of them, the misguided policies and prejudices that too often have distorted the West’s dealing with this critical region of the world. Recognizing these past failures and yet still hampered by biased attitudes shaped by negative perceptions, some leading voices in the West now argue for disengagement from the region.

We found that Arabs do in fact respect the USA and its values of freedom, innovation and opportunity. What they don’t like are our policies towards them. Their political priorities are much like ours: secure employment, better educational opportunities and improving their health care. We also learned that mosque-attendance rates were comparable to church-attendance rates. And when Arabs watch television, their favorite programs are films, soap operas, and reality and game shows— in other words, like Americans, Arabs watch TV to be entertained.

For that reason, I was pleased that the Tony Blair Institute for Global Change commissioned my polling firm, Zogby Research Services, to undertake an updated poll of opinion in seven Arab countries. Acknowledging that the Arab world sits at the pivot point of three continents in which Western nations have invested so much, and that it is a region of enormous human potential, the Institute made clear its belief that correcting course is the better option than withdrawal. And the path forward, as it proposes, is to replace myths and misconceptions with genuine understanding.

For us, polling opens a window, allowing Arab voices to be heard. I call it “the respectful science” because we record the views of every respondent. When we analyze the results, a portrait emerges that can assist us in dispelling stereotypes and correcting misconceptions. And if we pay attention to what people are telling us, we can better shape our policies to respond, to meet their real needs, not the ones we have assumed they have.

What we learn from our 2022 polling is that across the region strong majorities of Arabs: support equal rights for women in hiring and in the workplace; favor equipping young people with technological skills so they can better compete in the economy of the future; are either moderately religious or secular; believe that when religious movements govern, they make countries weaker, and believe that religion as it is taught in their countries needs to be modernized.

In “Arab Voices,” I noted the widespread American perception that Arabs hate us, despise our values, and spend too much time listening to preachers and television programmes that reinforce this hatred. Comparing those results with our polling from across the Arab world revealed a profound disconnect. We found that Arabs do in fact respect the USA and its values of freedom, innovation and opportunity. What they don’t like are our policies towards them. Their political priorities are much like ours: secure employment, better educational opportunities and improving their health care. We also learned that mosque-attendance rates were comparable to church-attendance rates. And when Arabs watch television, their favorite programs are films, soap operas, and reality and game shows— in other words, like Americans, Arabs watch TV to be entertained.

Given that this has been our life’s work, we’re delighted the Institute provided us with the opportunity to conduct new polling exploring the critical issues facing the Arab world today. It has undertaken to look deeply into Arab attitudes and lay out a forward-looking agenda that responds to Arab aspirations.

A final note to policymakers and political pundits: Check your biases at the door and listen to what Arabs are telling us about what they want. As my mother used to tell me: “If you want others to hear you, you must listen to them first.” Thanks to the Tony Blair Institute, Arab voices are speaking to you. Listen to what they’re saying.