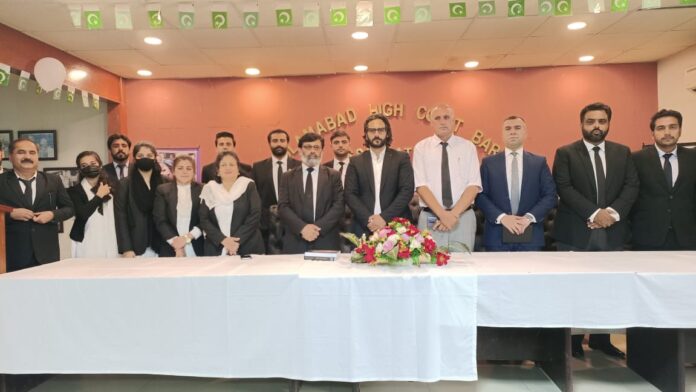 ISLAMABAD: The speakers in a seminar on Monday urged the Pakistan’s legal fraternity to advocate the Kashmir cause and establish Kashmir cells in all district and high courts.

Speaking on the occasion, President IHCBA Shoaib Shaheen Advocate said that India had failed to uphold democratic values and the International commitments pertaining to Human Rights. He further said that India was adamant about employing violence as an instrument to coerce unarmed Kashmiris thereby perpetrating grave Human Rights Violations.

Assistant Professor IIUI Prof Abdur Rauf Khattana eloquently expounded on the disputed status of IIOJK and also the tactics employed by India to illegally occupy the territory. During his address, he exposed the farce democratic face of India which is

being used to whitewash the denial of Kashmiris’ rights and the violation of Human Rights in the occupied territory. He further explained the lawfare measures under International law which could be employed to ensure that the perpetrators of war crimes in IOJK were held accountable.

He recommended the documentation of all such war crimes and also looking for avenues like Universal Jurisdiction to build pressure on Indian government.

Research Associate India Study Centre, Muhammad Ali Baig said that the Kashmiris and Pakistanis have blood ties with each other. He added that the denial of basic rights of Kashmiris was in contravention to the multiple UNSC resolution.

He asserted that the deceptive instruments and tactics like the accession and hollow provision of internal autonomy to the erstwhile state of Jammu Kashmir had ensured and aided the Indian occupation of IIOJK.

He further stressed that Pakistan needed to up the ante and launch an offensive diplomatic program against India to expose its fake democratic facade.

Senior Lawyer, Muhammad Ashraf Qureshi highlighted the shortcomings in the constitutional set-up of Azad Jammu Kashmir (AJ&K), while expounding on the lack of clarity in Pakistan’s stance pertaining to the constitution of AJK.

He urged all the Kashmiris to unite and work collectively in synergy against the occupier India.

Executive Director LFK Advocate Nasir Qadri said India’s independence act of July 1947 made no mention of Jammu and Kashmir, rather it was illegally occupied by India’s occupying forces without any veneration to the aspirations of Kashmiris.

He further highlighted the importance of the legal fraternity’s role in the Lawfare for Kashmir, and proposed the establishment of Kashmir cells in all the District / High Courts across Pakistan, particularly in Islamabad, Lahore, Karachi, and Peshawar.