GAZA CITY, PALESTINIAN TERRITORIES: At least 15 Palestinians have been martyred and 125 injured as Israeli warplanes are continuing to strike military targets throughout the Gaza Strip for the second day on Saturday.

Israel hit Gaza with air strikes on Saturday and a Palestinian militant group retaliated with a barrage of rocket fire, in the territory’s worst escalation of violence since the war last year.

Israel said it was forced to launch a “pre-emptive” operation against Islamic Jihad, insisting the group was planning an imminent attack following days of tensions along the Gaza border. 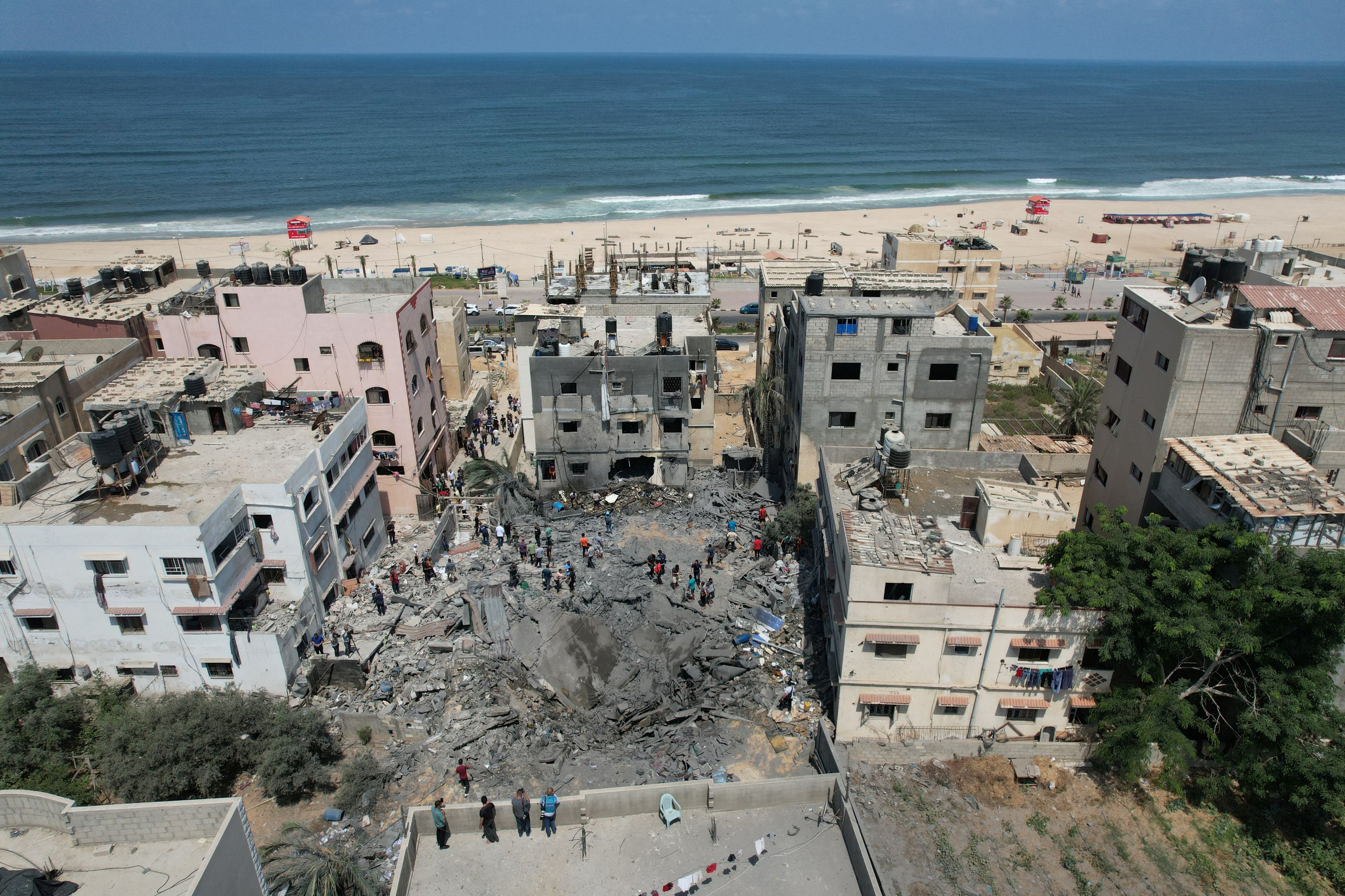 A building struck down in an Israeli air strike, amid Israel-Gaza fighting, in Gaza City, August 6, 2022. /Reuters

The Israeli airstrikes, dubbed “Operation Breaking Dawn,” targeted “10 terrorist operatives” of the PIJ in Gaza to “eliminate the threat to the citizens of Israel,” according to the Israeli military.

Dozens of rockets were fired from the Gaza Strip into Israel on Friday evening by the PIJ, all of which were either intercepted or fell in open areas, causing no injuries, the Israeli military said.

According to the Israeli Defense Forces, the group launched some 80 rockets in southern Israel. Nearly half of them fell short in Gaza, and 46 crossed the border, of which 33 were intercepted by the Iron Dome defense system, and the rest fell in open areas, causing no injuries.

Egypt’s official Ahram news site reported that Egyptian officials were mediating between Israel and Palestinian groups in Gaza in an effort to end the fighting and restore the 2021 ceasefire agreement.

“Egypt is conducting intensive communications with the Palestinian and the Israeli sides to end the ongoing escalation in Gaza,” the report said, citing an Egyptian official.

Israel’s army is preparing for its aerial operation in Gaza to last a week, saying Saturday that there are currently no discussions on a ceasefire with Islamic Jihad militants.

The military “is preparing for the operation to last week” and is “not currently holding ceasefire negotiations,” an army spokesperson told AFP, confirming reports in Israeli media.

‘Will not shy away’

Israel’s closure of a key goods crossing four days ago resulted in Gaza’s power plant shutting down on Saturday, due to a “fuel shortage,” a spokesman for the enclave’s electricity distributor said.

Diesel for the plant is usually trucked in from Egypt or Israel, which closed its two border crossings with Gaza on Tuesday citing security concerns.

“Israel isn’t interested in a wider conflict in Gaza, but will not shy away from one either,” Prime Minister Yair Lapid said in a nationally televised address on Friday.  Air raid sirens sounded across southern Israel on Saturday, but there were no immediate reports of casualties or major damage.

Officials in border areas urged people to stay close to shelters, which have also been opened in the coastal city of Tel Aviv.

Hamas has fought four wars with Israel since seizing control of Gaza in 2007, including the conflict last May.

Both Hamas and Islamic Jihad are considered terrorist organisations by much of the West.A flare up with Islamic Jihad came in 2019, following Israel’s killing of Baha Abu al-Ata, Jabari’s predecessor. Hamas did not join the fray in that episode.

Hamas’s moves now could prove crucial, with the group facing pressure from some to restore calm in order to improve economic conditions in Gaza.

On Friday, the health ministry reported “a five-year-old girl, targeted by the Israeli occupation” was among those killed.

The girl, Alaa Kaddum, had a pink bow in her hair and a wound on her forehead, as her body was carried by her father at her funeral.

Israeli military spokesman Richard Hecht said Friday “we are assuming about 15 killed in action” in Gaza, referring to Palestinian combatants.

Israeli tanks were lined up along the border, after the military said Thursday it was reinforcing its troops. The measures followed the arrest in the occupied West Bank of two senior members of Islamic Jihad, including Bassem al-Saadi, who Israel accuses of orchestrating recent attacks.

Israel on Saturday broadened its operation against Islamic Jihad, announcing the arrest of 19 people it said were members of the group in the occupied West Bank. Israel has conducted a near relentless wave of often deadly raids inside the West Bank since mid-March in response to lethal attacks on Israeli citizens.