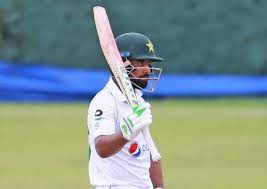 The 22-year-old Abdullah Shafique impressed many, including Babar with his solid technique during the home Test series against Australia in March, this year.

He scored his maiden Test hundred in the first Test at Rawalpindi, followed by a 96 and 81 in the second and third Test, respectively.

Following his impressive display, Babar appreciated Abdullah and revealed that they compared him with great batters like Kane Williamson and Rahul Dravid.

“I am honoured that Babar compared me with Rahul,” he told media in an interaction here.

However, he revealed that the two-time World Cup-winning Australian captain Ricky Ponting was his favorite batter and he emulated him. “But, I follow Ricky Ponting a lot. I also follow Babar and Yousaf Bhai,” he added.

He said Babar was a world-class better and he was learning a lot from him. “Babar has good faith in all team players and keeps on appreciating their performance.”

About his experience for being with the team during the recently-held home ODI series against West Indies, he said he learned a lot. “It was indeed a great experience for me. Although I didn’t get the opportunity to play, it was good being around the players who were playing,” he added.

He said practicing at Pindi Cricket Stadium Rawalpindi would be beneficial for the upcoming Sri Lanka tour as the conditions there were similar to those of that country.

“We have played good cricket in the last series against Australia. [But] the challenges in Sri Lanka would be different. But we are preparing accordingly.

Pakistan are set to tour Sri Lanka for a two-Test series starting 16 July, part of the ICC World Test Championship 2021-23. The Test squad are finalising their preparations for the series at the Pindi Cricket Stadium.