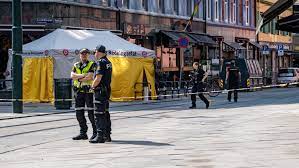 Norway paid tribute on Sunday to the victims of a deadly shooting near a bar in the capital that shocked the normally peaceful country and led to the cancellation of a Pride march.
The altar of Oslo cathedral was draped in a rainbow cloth for a service to remember the victims of the attack, attended by Crown Princess Mette-Marit.
Investigators are probing the motives of the suspected gunman, who opened fire in the early hours of Saturday, killing two and wounding 21.
“Oslo is in mourning. The whole country has been shaken by this attack,” the Norwegian Protestant Church said. It come 11 years after right-wing extremist Anders Behring Breivik killed 77 people in a shooting spree that shook the nation to its core.
“Bullets cannot kill love,” said the head of the Church, Olav Fykse Tveit.

The shooting occurred at around 1:00 am on Saturday (2300 GMT on Friday) near the London club in Oslo’s packed nightlife district, where parties were in full swing.
Two men in their 50s and 60s died. Twenty-one other people were wounded.
Police quickly arrested the suspect, whom they described as a 42-year-old Norwegian man known to the nation’s security services. Norwegian media named him as Zaniar Matapour.

The suspect “has a long history of violence and threats”, PST chief Roger Berg said.
He said the man had been on the PST’s radar “since 2015 in connection with concerns about his radicalisation.”

He also had “difficulties with his mental health”, Berg added.
Police ordered the man to be placed under “judicial observation” to determine his mental state. He refused on Saturday to be questioned as to his motives.
On Saturday, the intelligence services raised the country’s threat level from moderate to “extraordinary”.