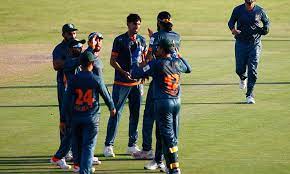 In the morning, KP won the toss and decided to bat first but their decision proved off beam. Badar Munir opened the bowling for Balochistan and took the hat-trick in the first over and KP couldn’t recover from this big jolt.

KP made 164 runs for the loss of 8 wickets in allotted 20 overs, Sanaullah was their top scorer with 68 runs off 51 balls and Naseeb Ullah made 55 runs. Badar Munir took 4 wickets and Kamran Akhter claimed 2 wickets.

In reply, Badar’s devastating innings of 100 runs off 38 balls featuring 15 (4’s) and 3 sixes helped Balochistan to reach the target in just 9.5 overs without any loss. Akmal Hayyat also chipped in with 44 runs off 27 balls. Badar was declared man of the match.

In the second match, Punjab downed Sindh by 24 runs. Sindh won the toss and decided to bowl first. Sindh tighten the screws till the 10th over and Punjab was hovering at 88 runs for 2 wickets, thereafter Punjab accumulated 131 runs in the last 10 overs of the innings and finished at 219 runs for the loss of 7 wickets. Muhammad Rashid was the star with the bat, he made 119 runs off 61 balls and was declared man of the match.

Sindh in reply, tried well but fell 24 runs short of the target. Sindh made 195 runs for the loss of 7 wickets in stipulated 20 overs. Nisar Ali made 52 runs off 22 balls and Faisal Mehmood remained unbeaten at 40 runs. Shahzaib Haider took 2 wickets while Sajid Nawaz and Anees Javed claimed a wicket a piece.