Media stakeholders deliberate over challenges to journalism at GMF 2022 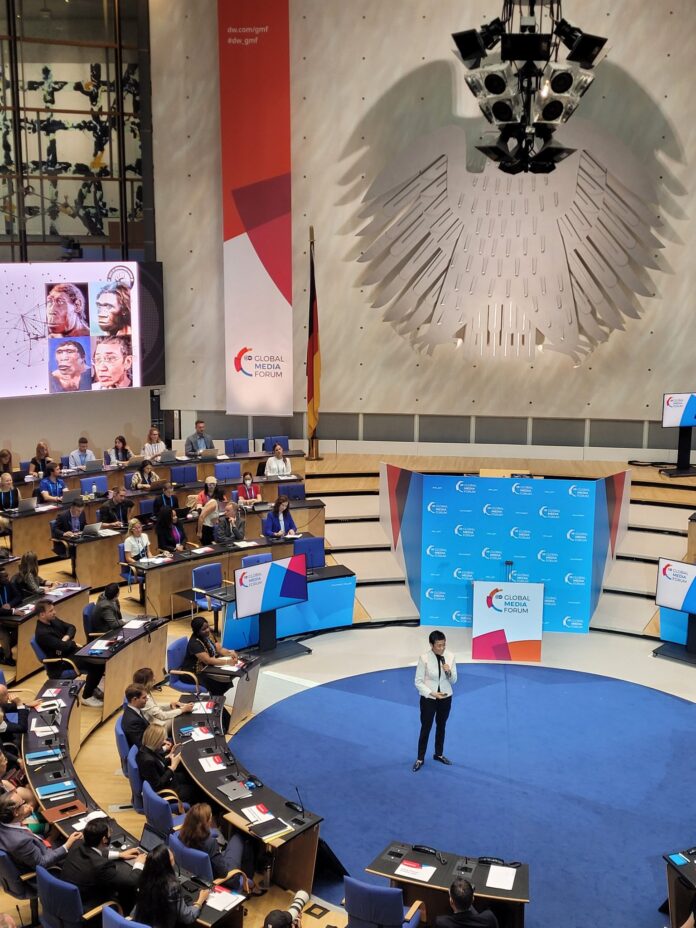 BONN: The Deutsche Welle (DW) Global Media Forum 2022 concluded in the evening on Tuesday at the World Conference Center in Bonn, Germany, with journalists from over 100 countries participating at the conference. The two-day event hosted a wide range of panels dedicated to deliberations over the challenges facing journalism around the world. The annual Global Media Forum in Bonn was held in person for the first time since 2019, with the previous two editions being held online owing to the covid-19 pandemic.

Day One on Monday opened with remarks from DW Director General Peter Limbourg, followed by the keynote address of Maria Ressa, the 2021 Nobel Peace Prize laureate. Ressa highlighted the challenges she has faced herself as the CEO and founder of Rappler being targeted for her journalism by both the Philippine authorities and users online. “We are at an existential moment and we must work together. We must define the problem, and it will require all of us to protect democracy and to prevent the rise of fascism,” Ressa said in her address.

The keynote address was followed by remarks from Federal Minister for Foreign Affairs Annalena Baerbock and Minister President of the State of North Rhine-Westphalia Hendrik Wüst. The initial plenary discussions focused on the future of media, entitled ‘Journalist gone activist?’ and ‘Shaping the future of journalism in wartimes’. The latter, much like much of the conference, focused on the Ukraine War. The highlight of the day was the DW Freedom of Speech Award being giver to Ukrainian visual journalists Mstyslav Chernov and Evgeniy Maloletka, for their coverage of the fall of Mariupol.

“Sometimes, information is more important for human survival than even food. That thought allowed us to keep working, even when it was becoming harder every day,” said an emotional Chernov in his acceptance speech.
Before the award ceremony, plenary sessions entitled ‘Fake or fact? Promoting digital literacy’ and ‘Money makes the world go ’round Future-proof journalism in changing times’ were held. The conference also had parallel afternoon workshops being hosted inside the World Conference Center. From the future of African journalism, to updating journalistic skillsets, to the fight against fake news, a range of subjects were covered in these sessions. DW also organised training sessions for various journalists interested in adding new skills to their repertoire.

Day Two on Tuesday began with plenary sessions on Western reporting on the Global South, coverage from war zones, the digital Iron Curtain, science journalism and combatting stereotypes. Award ceremonies were held on Tuesday for the winners of a ‘startup contest’ and ‘women and media technology’. The workshops held on Tuesday focused on agenda leading to willful omission, shaping the next generation of journalists, artificial intelligence and creatives from Africa.

While all sessions were interactively streamed online, on both days organised talks and workshops that were exclusively online. Themes for these sessions ranged from the Taliban takeover in Afghanistan, to shortform journalism, to fact checking. Sessions tagged with ‘Pitch’ were held in the Rondel room at the World Conference Centre with themes ranging from community newsrooms, to women’s health issues, to youth journalists.

The final plenary sessions of the two-day workshop focused on public opinion, media coverage in crises and a prediction for the news in the year in 2050.

The final talk was given on ‘Journalism in conflict between short-term attention and long-term action’ by Professor of Media Studies Bernhard Pörksen. The Global Media Forum 2022 was closed by DW Director General Peter Limbourg.

K K Shahid
The writer is a member of staff