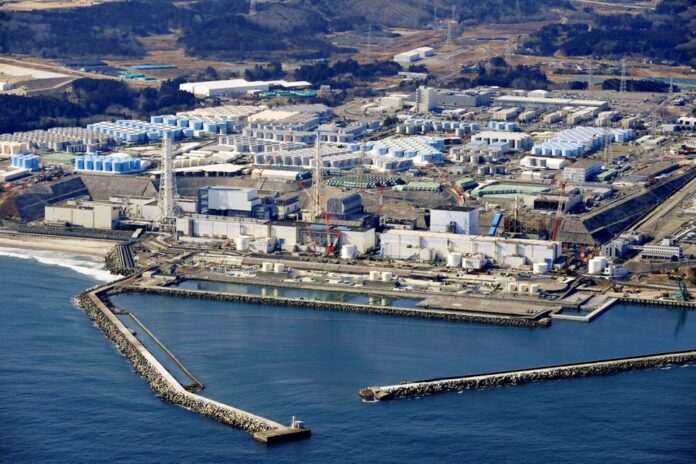 The Fukushima Daiichi nuclear power plant, as seen in March, has been a focal point for concerns over the Japanese government’s plan to dump contaminated water into the sea.

The Tokyo Electric Power Company, according to Japanese media reports, started seabed excavations on May 5 to build a drainage outlet for the nuclear-contaminated water to flow from the Fukushima Daiichi nuclear power plant to the Pacific Ocean. The seabed operation is expected to be completed in early July, meaning Japan has taken a substantive step toward discharging the radioactive water into the sea despite strong opposition at home and abroad.

In March 2011, immediately after a tsunami triggered by a massive earthquake destroyed the Fukushima Daiichi nuclear power plant, TEPCO discharged the highly radioactive water into the sea. But under great pressure from the public, it stopped its controversial move and began building tanks to store the contaminated water.

But these storage tanks can hold only 1.37 million cubic meters of water, and are expected to be full in 2023. So the Japanese government and TEPCO announced on April 13, 2021, that the radioactive water would be “discharged into the sea”.

This plan, too, has come in for severe criticism from the Japanese people and the international community, because it would cause immense damage to the marine environment, as well as human beings, especially in neighboring countries, without benefiting the Japanese people.

The Japan Atomic Energy Regulatory Commission issued “a draft of review paper” on May 18 preliminarily agreeing to the government’s plan, but will make a final decision after one month.

However, the Japanese government said the radioactive water would be treated to meet the so-called standard for discharge. After the nuclear accident, TEPCO used a kind of “purification” equipment to treat the contaminated water to make it less harmful. It claimed that all radioactive materials will be removed from the toxic water, except for tritium.

But in 2018, on studying the contaminated water treated in 2017, a group of experts found that it contained not only tritium but also other radioactive materials such as carbon 14, cobalt 60 and strontium 90, all of which are highly harmful to living beings.

TEPCO has also said the radioactive water will be discharged after being diluted with seawater. But studies show that 1 liter of the radioactive water needs to be mixed with 254 liters of clean seawater to be properly diluted, and it would take at least 30 years for the process to be completed.

The severe consequences of the Fukushima nuclear accident have been emerging over the years. The animals in the Fukushima isolation zone have been showing visible effects of radiation, radioactive materials in fish in the nearby waters are much higher than normal levels, and the incidence of thyroid cancer in Fukushima has significantly increased.

Since the marine ecosystem is a highly integrated and delicate system, the Fukushima water will be enough to contaminate the entire Pacific and beyond.

The international scientific community has reached a consensus on the cumulative effects of radioactive materials. For instance, a Greenpeace report issued in October 2020 said that if discharged into the sea, the radioactive water could also affect human beings’ DNA. And the US National Oceanic and Atmospheric Administration and other marine authorities said that once the Fukushima water enters the sea, its radioactive materials will spread across the Pacific and other oceans, causing unprecedented damage to the marine ecology.

Ever since the Japanese government decided last year to discharge the radioactive water, countries around the Pacific Rim have been opposing it. In particular, China, the Republic of Korea, Russia and some Pacific island countries have voiced serious concerns over Japan’s decision.

Many environmentalists and scholars have also criticized Japan’s plan. In Japan alone, thousands of people, mainly belonging to NGOs, as well as the National Federation of Fisheries Associations have publicly opposed the plan.

In a public opinion survey conducted by Japanese media outlets, nearly 60 percent of the respondents said they were worried about the effects of the radioactive water on the sea and marine life. And rightly so, because even 11 years after the Fukushima nuclear accident, prices of sea food, vegetables and fruits from Fukushima Prefecture, Ibaraki Prefecture, Miyagi Prefecture and nearby places are still much lower than those from places not affected by nuclear radiation.

Besides, the investigation report of the International Atomic Energy Agency’s technical work group released on April 29 did not give a final judgment on whether discharging the nuclear-contaminated water into the sea was safe, and instead suggested a series of technical improvements to reduce its environmental impact. In fact, Japan did not allow the IAEA’s technical work group to evaluate other plans. As a result, it was not possible for the agency to find the best way to deal with the problem.

But despite the strong opposition to its plan both at home and abroad, Japan is hell-bent on discharging the toxic water into the sea, which shows that it does not give two hoots to the concerns of the international community or the Japanese people.

Actually, Japan can deal with the issue in a way that would not harm the marine environment. For example, the Japan Atomic Energy Civic Committee has said that storing the radioactive water in large storage tanks installed on land or “solidification treatment with mortar” are safer ways to deal with the toxic water.

As a signatory to the United Nations Convention on the Law of the Sea, Japan knows that discharging the contaminated water into the sea will have cross-border effects. But without exhausting all safe disposal means, disclosing all relevant information, and consulting with all the stakeholders including neighboring countries, Japan has decided to go ahead with its plan in order to fulfil its selfish economic and political interests, and save costs.

Japan’s decision is a serious threat to marine life as well as human beings, and a gross violation of international rules. Therefore, Japan should change its decision, conduct a serious study on safe operational plans to deal with the contaminated water, and act like a responsible country.