Govt vows to bring down loadshedding by 3.5 hours from today 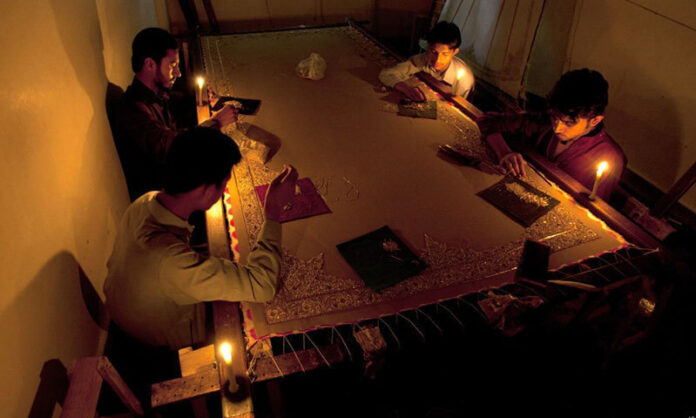 — Loadshedding to further down to two hours by June-end

ISLAMABAD: Federal government on Monday announced to reduce the loadshedding of electricity from today to three and a half hours, assuring the nation that the loadshedding will further reduce in July as the production of coal plants is increased.

Federal ministers of the Pakistan Muslim League Nawaz (PML-N) Shahid Khaqan Abbasi, Khurram Dastgir, Marriyum Aurangzeb, and others made the announcement at a press conference here on Monday.

Shahid Khaqan Abbasi said the loadshedding will be reduced from today to 3 and a half hours and from June 16, it will also be less than 3 hours. He further stated that the government will reduce the loadshedding to one and a half to two hours only from June 30, and will be able to further reduce load shedding in July.

Abbasi began the press conference by presenting the reasons for the energy shortfall, holding the former government responsible. The country’s electricity demand has exceeded 25,000MW during the summer, he said.

He highlighted that when the current government assumed charge, the electricity generation capacity was at 17,000MW which was increased to more than 21,000MW over the past three weeks. He went on to say that the government and cabinet were sorry for the current loadshedding but asked for time to resolve the existing issues.

“Today, we are producing 21,000MW which means we have a shortfall of 4,000MW,” he said, adding that this translated into a little more than four hours of loadshedding to fill the supply and demand gap. We have decided that from tomorrow (Tuesday) we will reduce loadshedding to three-and-a-half hours, he said, adding that additional money had been paid while oil had also been arranged to ensure this. “We are hopeful that by tomorrow loadshedding will be reduced to 3.5 hours.”

In the next phase when coal is imported, the duration of loadshedding will further reduce by June 16, he said. “By June 30, the duration will be less than two hours, close to an hour-and-a-half,” he said. He expressed the hope that the government would be able to reduce this further during the month of July.

The PML-N leader further said that the government was not interested in making excuses and was focused on fixing the issues plaguing the country. He lashed out at the former government for the lies it told regarding establishing power plants, saying that Pakistan was unable to fulfil its electricity demand for the summer.

The press conference comes days after Prime Minis­ter Shehbaz Sharif directed the authorities to come up with an “emergency plan” within 24 hours that was aimed at reducing electricity loadshedding.

He had issued the directives while presiding over a meeting on Saturday. The meeting came amid reports about hours-long loadshedding in various parts of the country, leaving the people to suffer in high temperatures. The meeting which lasted five hours reviewed the loadshedding situation in the country and discussed measures to reduce the electricity shortfall.

Over the weekend, Defence Minister Khawaja Asif had proposed the nation to take advantage of “365 days of sunshine” and operate markets in the daytime as opposed to the convention of “opening markets at 1pm and closing them at 1am”.

“Our markets open at 1pm and close at 1am. This [practice] is found nowhere in the world,” Asif had tweeted late Saturday night. “God has given our country 365 days of sunshine and yet we turn on the lights in the dark to do business.”

If markets set the right business hours then — with Karachi excluded — 3,500MW of electricity can be saved. “Tough circumstances call for tough decisions,” he had said.