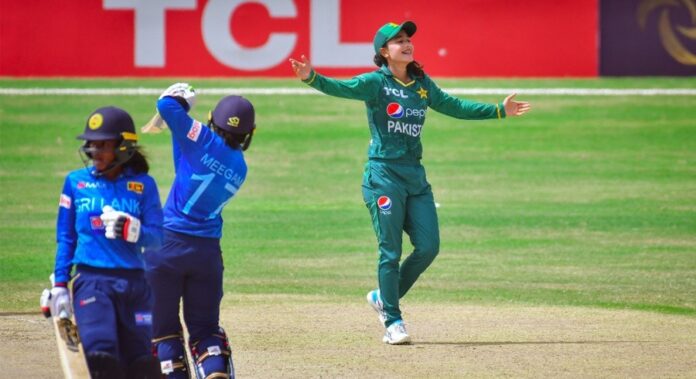 ISLAMABAD: Pakistan women’s team has beaten Sri Lanka in the first T20I of the three-match series by 6 wickets with debutant Tuba Hassan standing out for delivering the best bowling figures on a debut.

Chasing a target of 107 runs, Pakistan reached the low total in 18.2 overs as Nida Dar finished on 36* from 27 deliveries.

Pakistan made the worst possible start as Gull Feroza was trapped LBW by Sugandika Kumari in the first over for nought. However, her opening partner Muneeba Ali (18), Iram Javed (18), and captain Bismah Maroof (28) stabilised the innings.

Oshadi Ranasinghe took two quick wickets but ultimately there were not enough runs on the board for Sri Lankan bowlers to defend.

Nilakshi de Silva and Harshitha Madavi were standout batters with scores of 25 each. Leg-spinner Tuba Hassan, playing her first match, took three wickets for 8 runs – which is now a new record for best bowling figures on debut for Pakistan Women in T20I cricket.

It must be noted Sri Lanka are in Karachi for three T20Is and as many ODIs. The final two T20Is will be played on May 26 and 28, respectively.

Three ODIs, part of the third edition of the ICC Women’s Cricket Championship, will be played on June 1, 3 and 5, respectively.