At least 12 dead as passenger vans, dumper collide in Gujranwala 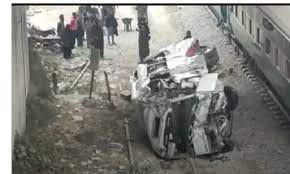 At least 12 people, including a girl and six women, were killed and eight others were injured in a collision between two passenger vans and a dumper near Kot Ladha in Gujranwala on early Friday morning.

According to rescue sources, the collision occurred as the driver of the dumper recklessly hit two wagons on his way back from Sargodha.

The bodies and injured were shifted to different hospitals. The dead include a four-month-old baby Harin, Munawar Bibi-Asma, Fauzia, Halima, Khaleda, Asiya, Elias, Gulzar, Aslam, Irfan and an unidentified person.

The nine people killed in the accident were residents of Rehmanpura Church.

According to the police, the case of Gujranwala traffic accident has been registered at Kot Ladha police station.

May 23, 2022
The PML-N led alliance had reiterated that it could resolve the economic problems including withdrawal of the huge subsidy on petroleum products if its...