Ehsan Mani reveals why Sarfaraz Ahmed was removed from captaincy 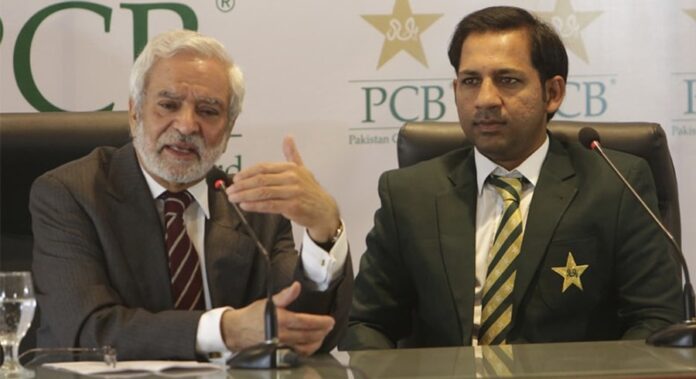 While talking in an exclusive interview with Cricket Pakistan from London, Ehsan Mani also dismissed the rumours that Sarfaraz Ahmed was removed on Imran Khan’s advice.

“There was not even a single instance where Imran interfered in PCB matters and all the decisions were based on merits. Take the example of Sarfaraz, his performances were dropping and removing him from captaincy was not taken by Imran at all. We replaced Sarfaraz with Rizwan, who has been phenomenal from the get-go,” he concluded.

Moving on to the Pakistan Super League (PSL) and the relationship between the franchise representatives and PCB under Mani’s tenure deteriorated to the extent that matter was dragged into the courts. Responding to this, Mani said that he was ‘willing to compensate franchises better than their current deal but if they are happy then so be it.’

Speaking about the inclusion of Wasim Khan in the PCB setup, Ehsan Mani said that it was a necessary thing to do as he had no aspirations or desires to maintain complete control of PCB for himself.

“I have worked with a number of top-level organisations and I am fully aware how corporate governance works. The role of a chairman is related to big-picture; to set a direction, creating strategies, and approving business plans”.

“The power to implement these things should lie with the Chief Executive. He is then answerable to the board about the progress he has made based on the plans put forth by the board itself. He himself has no power to take ground breaking decisions,” Mani added.

“Wasim Khan is an excellent man. Whether he was pushed out or whether he left himself, I will not comment on that. But what happened afterwards? The ICC jumped at the opportunity to secure his services; this is an honour because ICC has an abundance of people to choose from across the globe,” he gave valid justifications.

Ehsan Mani refused to comment on Wasim Khan’s departure and said ‘ask Ramiz Raja why he was let go because I don’t know.’

Mani’s administration was also criticised for offering hefty salaries to certain individuals but he rejected the claims and stated that ‘you pay what people are worth.’

“The entire media refused to understand why people like Wasim Khan were compensated handsomely. If you look at how much he is now earning with ICC, it is almost double to what PCB were offering him at that time. Coaches were compensated according to what was agreed upon,” he added.

Ehsan Mani further responded to the criticism that Pakistan is perhaps not financially stable to adopt the new domestic system that was introduced under his tenure.

“There are not many people in the world who understand cricket administration and business of cricket better than I do. Had that not been the case then why does ICC still consult me on such matters till date?”

“When I introduced the system, I worked out all the finances of this model. We have to compete with the top nations such as England, Australia, and India who have an annual budget of £350 million, £300 million, and $1.6 billion respectively,” Mani added.

“We worked on grassroot level, which meant promoting school and university cricket. I was delighted to see that after years, around 3800 genuine clubs played cricket in Pakistan. There is cricket on city level with around 92 or 96 cities participating”.

“Eventually, this would have helped in promoting good players to provincial level; there were two levels to that as well – the first team and their second team. It was a complete pathway,” Mani elaborated on the system he helped introduced.

“The PCB needed around 200 million dollars on an annual basis to carry out this new system and we developed a business model to bring in that money which wasn’t from our government,” Mani further revealed.

Mani added that he did not want to ask for a three-year extension as it was something he has not done in his life, according to himself. I could have stayed on for 3-4 additional months.

“Our model was implemented 99.9 percent. Everyone was ready to take the last step as well. However, I cannot reveal why that did not happen. Maybe you will have to ask other people regarding that,” he added.