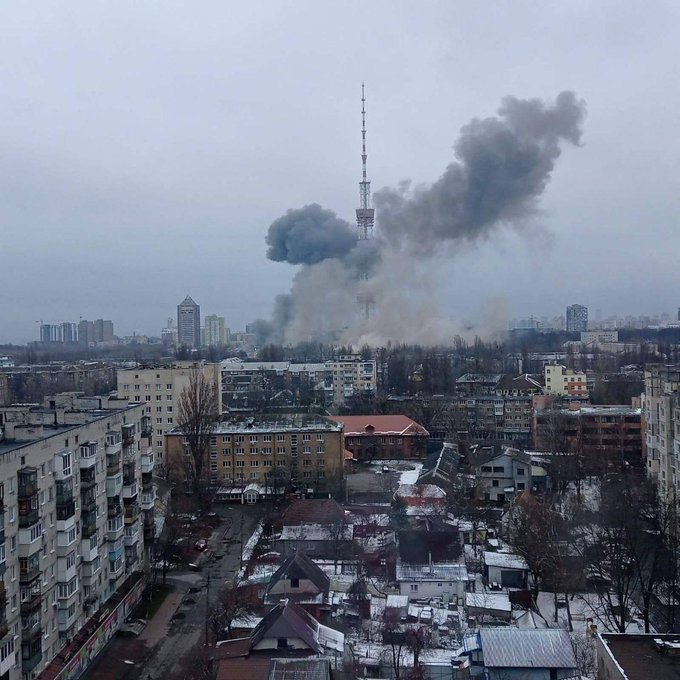 After a blast sounded around the city and smoke was seen rising in the Babi Yar district, the emergencies service said five people were also injured in the attack.

Ukrainian officials released footage of charred bodies and cars damaged by the strike, which came during a surge of Russian attacks on Ukraine’s second city of Kharkiv.

“To the world: what is the point of saying ‘never again’ for 80 years, if the world stays silent when a bomb drops on the same site of Babi Yar,” Ukrainian leader Volodymyr Zelensky asked in a tweet.

“Once again, these barbarians are murdering the victims of Holocaust!”

The tower is based near the Babi Yar ravine where more than 30,000 were slaughtered by the Nazis during World War II.

The tragedy is commemorated by a memorial statue and is a site of pilgrimage for many Jews.

Kyiv mayor Vitali Klitschko said the attack damaged the tower’s transformer substation, which provides it with electricity, as well as some of its hardware.

The interior ministry said that back-up systems would be put into operation to restore programming.

Most Ukrainian channels appeared to be functioning normally about an hour after the strike.

Earlier, the Russian defence ministry spokesman had said that Moscow’s forces would hit technological infrastructure in Kyiv “to suppress information attacks on Russia”.

But the targets he cited — the SBU security service and the army psychological operations unit — did not include the civilian-run television tower in the capital.

Russian forces stepped up attacks on cities across Ukraine on Tuesday and warned they would target security buildings in the capital Kyiv, as the West promised more devastating sanctions and the UN appealed for $1.7 billion for urgent aid.

As Moscow intensified its offensive six days since the invasion began, Ukraine’s second city, Kharkiv, said the Russian army had fired on its local administration building with missiles, killing at least 10 people.

An AFP reporter saw rescue workers carrying a body out of the building, which was surrounded by debris and whose windows were completely shattered.

“This is state terrorism on the part of Russia,” said Zelensky in a video address to the European Parliament.

He reiterated his urgent appeal for his pro-Western country to join the European Union, adding: “Prove you are with us, prove you are not abandoning us and you are really Europeans.”

EU lawmakers, many wearing #standwithUkraine T-shirts bearing the Ukrainian flag, others with blue-and-yellow scarves or ribbons, gave Zelensky a standing ovation as he addressed the European Parliament via video link.

“We are fighting to be equal members of Europe,” Zelensky said in Ukrainian in a speech translated into English by an interpreter who spoke through tears.

“The EU will be much stronger with us.”

Officials said more than 20 people were also wounded in Kharkiv in northeast Ukraine and 10 more people discovered alive under the rubble.

The International Criminal Court has already opened a war crimes investigation against Russia and EU foreign policy chief Josep Borrell said the most recent attack “violates the rules of war”.

In southern Ukraine, the city of Mariupol on the Azov Sea was left without electricity after bombardment, while Kherson on the Black Sea reported Russian checkpoints encircling the city.

In a key strategic victory for Moscow, Russia’s defence ministry said its troops had linked up with the forces of pro-Moscow rebels from eastern Ukraine in a region along the Azov Sea coast.