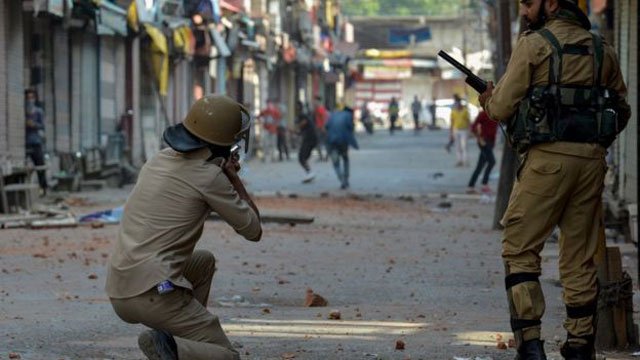 SRINAGAR: After darkness suddenly enveloped the life of Ashraf Wani, 30, in 2016, when pellets allegedly fired by Indian police to disperse protesters hit his eyes, he found a way to bring light to his life by helping other victims.

Living with over 600 small lead pellets in his body which cause immense pain when exposed to heat, Wani, who lives in a small village in Indian Illegally Occupied Jammu and Kashmir (IIOJK), told Anadolu Agency that isolation, trauma, and the knowledge that many will never see the world again is killing the victims of pellet guns.

Wani said now he devotes time to helping other victims, aided by donations from locals meant to cover education and medical expenses.

“It soothes my soul if some help reaches the victims,” said Wani.

Pellet guns were first time used by occupation forces in IIOJK to disperse street protests in 2010.

According to statements by the regional police, the pellet guns have only been used when the protests/protesters have turned violent, however many human rights organisations have rubbished this claim, questioning the “lethality” of the weapon.

In early 2018, a plea was also filed before the IIOJK High Court against the usage of pellet guns in the occupied region. It questioned the way government forces used it “indiscriminately” during the street demonstrations in IIOJK.

According to Human Rights Watch, as many as 4,592 people reported injuries and disabilities after receiving pellet shots from 2016 to 2019 in the region. Out of them, 1,459 sustained injuries in the eyes, resulting in 139 people losing their sight forever. Civil rights groups have also recorded the killing of 18 people due to pellet shots.

Wani, who lives in the village of Rahmoo in Pulwama, is now head of the Pellet Victims Welfare Trust, which seeks to help and support pellet victims in the wake of their crippling injuries.

The trust has 1,400 pellet victims as members, including two dozen women. Wani said the group provides medical expenses, education, and sometimes monetary help for victims to set up small businesses.

He said their issues are not limited to medical expenses alone but they also cover the loss of education, isolation, disability, and overall mental trauma.

“Most of us live in isolation now,” he said.

Before 2016, Wani worked for a telecom company as a field officer, collecting outstanding bills from customers while also pursuing his graduation.

But after the killing of freedom fighter Burhan Muzaffar Wani (no relation) in July 2016, his life took a different turn – first, he was hit by a bullet, and then by pellets.

“On Aug 24, 2016, a protest broke out in a nearby village in Pulwama. I was hit with a bullet. Everyone thought that I would not survive as the bullet hit my back and pierced my liver, grazed one of my lungs, and came out through the chest,” he said.

“It was a miraculous escape,” he added.

After staying on ventilator support for almost two weeks, Wani was discharged from the hospital a month later.

While he was still recovering from the bullet wounds at home, a fresh round of protests broke out in his village.

Wani thought of moving to a safer place near Lidergam hill, a small hilly place surrounded by a few dozen houses. But soon he got caught during tear gas shelling and pellet firing.

“I remember a policeman targeted me and fired indiscriminately. I was bleeding from head to toe. The pellets pierced all over my body,” he said.

Wani said when he regained consciousness after a week in the hospital, he realised that he had lost his eyesight.

“It was all dark, it sent shivers through my body the moment I felt that I would not be able to see again. At that moment, I felt it was better for me to die rather than become an unwanted burden on my family,” he said.

Since 2005, when he lost his father, he had the responsibility of bringing up four younger siblings, including three sisters. Besides pursuing education and working for a telecom company, he also worked in apple orchards to earn a living.