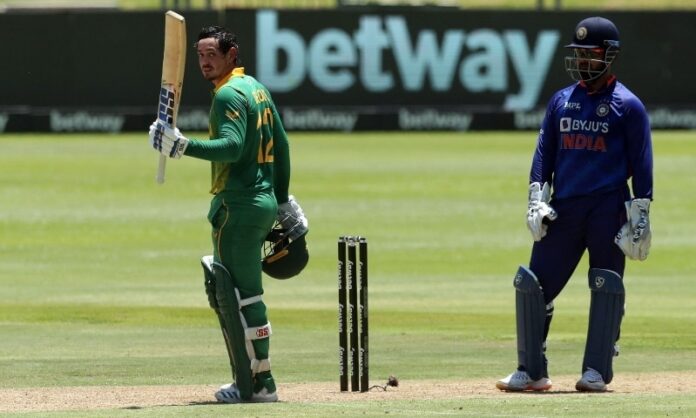 De Kock, who handed over the white ball captaincy last March to Temba Bavuma, made 124 off 130 balls as South Africa, seeking a clean sweep in the three-match series, scored 287 all out after being sent in to bat.

In response, India were all out 283 in 49.2 overs. Rohit Kohli top scored with 65 while Shikhar Dhawan scored 61. Deepak Chahar later set a win fro India with an outstanding inning of 54. At one point, India needed only seven runs of ten balls but Jasprit Bumrah threw the match away with a reckless shot and India couldn’t hold on to a match it could have easily sealed.

Earlier, Indian captain KL Rahul said his decision to bowl first on a blazingly hot day was based on the likelihood that there would be early assistance for his bowlers on a “sticky” pitch.

There were early challenges for the batsmen and South Africa were 70 for three before De Kock was joined by Rassie van der Dussen (52) in a fourth-wicket stand of 144.

Later there was turn and bounce for India’s spin bowlers but De Kock was in superb form, hitting 12 fours and two sixes before being caught at deep midwicket off Jasprit Bumrah.

Van der Dussen was caught in the deep in the next over and the innings lost momentum despite a hard-hit 39 by David Miller.

Prasidh Krishna, one of four changes in the Indian team, took three for 59, while Bumrah and Deepak Chahar took two wickets each.

Rahul said the changes were a combination of “niggles” and wanting to give other players opportunities.