Mini-budget would have negative impact on public: Bilawal 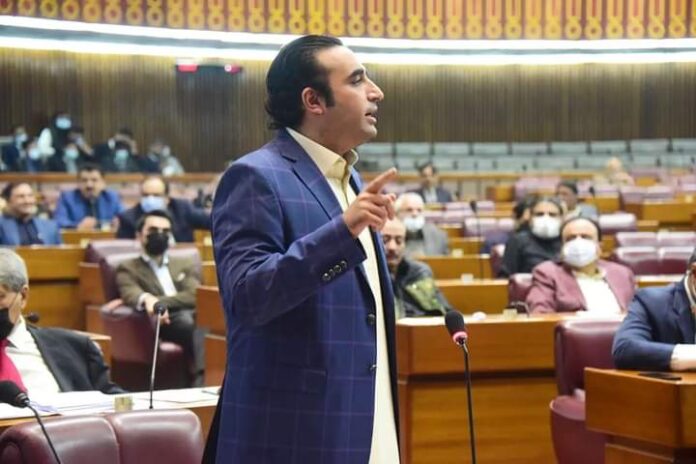 ISLAMABAD: Pakistan Peoples Party (PPP) Chairman Bilawal Bhutto-Zardari Wednesday said the so-called mini-budget tabled in the National Assembly by the government would have a negative impact on the public.

Participating in the debate on the Finance (Supplementary) Bill, 2021, aimed at amending laws relating to taxes and duties, Bhutto said the opposition benches urged treasury from day one to sit together and evolve consensus and initiate dialogue on the economy.

He said it was unfortunate the Pakistan Tehreek-i-Insaf (PTI) government did not respond positively to the offer.

He regretted that suggestions presented by the opposition had not been included in the budget passed in June last year.

Bhutto said it would have left a better impact if the suggestion of opposition parties had been presented before the International Monitoring Fund (IMF).

He claimed that during the last three years, inflation, unemployment and poverty had increased, and disagreed with the government’s point of view the economy was growing despite all odds.

He recalled when the budget was passed, the government had assured there would be no mini-budget in the fiscal year 2021-22. He also criticised the government for ending the tax exemption in what he called the proposed mini-budget.

“The common people will bear the impact of these measures.”

He asked the government to devise policies keeping in view the interest of the common people and opposed the proposed taxation on the use of cellular phone services, mobile phones, laptops and other items being used by the common people.

With the passage of the bill, he said the farming community would have to pay 17 percent taxes on the items related to the agriculture sector, which was unfortunate.

Bhutto said the farmers were in difficult conditions and it was the responsibility of the government to facilitate them.

The PPP chairman said it was also unfair to tax donations and charity items. He also disagreed with the stance of the government that Pakistan was the most inexpensive country in the region.

He also questioned why the government had imposed taxes on solar energy systems when climate change was the most pressing issue that Pakistan was facing.

During the PPP tenure, he said Benazir Income Support Programme (BISP) was launched to provide financial assistance to downtrodden segments of the society, besides it increased compensation of civil servants by 125 percent.

He also suggested the government to increase the salary of government employees by 100 percent, keeping in view the increased inflation.

He also asked the federal government to increase the minimum wage of the labourers as was done by the Sindh government.

Bhutto said it would have been much better if the funds allocated for health cards should have been utilised for the up-gradation of the government hospitals.

Earlier, Abdul Akbar Chitrali of Muttahida Majlis-e-Amal (MMA) said the government while passing the budget had given the commitment there would be no mini-budget in the coming months.

He feared the supplementary finance bill would open a floodgate of inflation, and suggested the government to withdraw it and take all possible measures to provide relief to the people.

After the speech of Bhutto, Minister for Energy Hammad Azhar was given the floor by Deputy Speaker Qasim Khan Suri to respond but he was interrupted by Opposition Leader Shehbaz Sharif who wanted to speak on a point of order.

Sharif said he still hasn’t finished his yesterday’s speech in the National Assembly wherein he had raised some questions about the condition of the economy which were not responded to by the Minister for Planning and Development Asad Umar.

Later on, Azhar was given the floor again, but this time Pakistan Muslim League-Nawaz (PML-N) MP Rana Sanaullah interrupted the proceeding, saying that an important debate was being held and the Minister for Finance was not present.

Upon which, the deputy speaker ordered for the members’ count that led to the adjournment of the House until meeting the quorum in due course of time.

LAHORE: The PTI on Saturday filed a petition in the Lahore High Court (LHC), seeking directions for the Election Commission of Pakistan (ECP) to...
Read more
Top Headlines