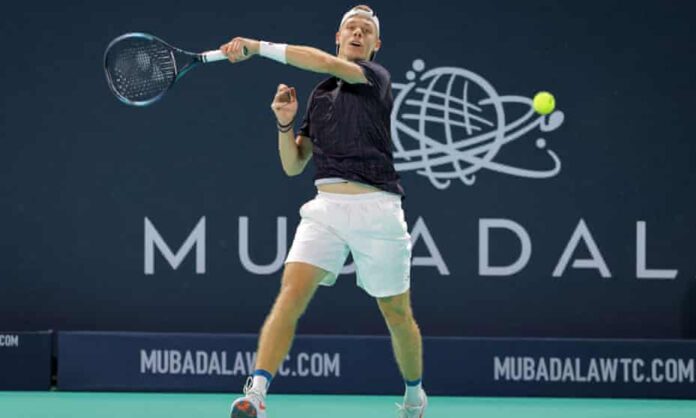 SYDNEY: World number 14 Denis Shapovalov has tested positive for Covid-19 after arriving in Sydney, he said Sunday, highlighting the virus threat to the Australian Open.

The 22-year-old was among the first players to enter Australia ahead of the ATP Cup teams event from January 1, where he was supposed to be playing for Canada, and with the first Grand Slam of the year three weeks away.

He said on Twitter he was experiencing mild symptoms and isolating — the latest player who competed at an Abu Dhabi exhibition this month to get coronavirus.

“Hi everyone, just wanted to update you that upon my arrival in Sydney, I tested positive for Covid,” Shapovalov said.

“I am following all protocols, including isolation and letting the people who I’ve been in contact with know.

“Right now I am experiencing minor symptoms and look forward to getting back on the court, when it is safe to do so.”

Shapovalov played Rafael Nadal in Abu Dhabi, with the Spanish superstar later also testing positive for Covid, throwing his plans for the Australian Open into chaos.

Australian Open chief Craig Tiley last week said he was confident the former world number one would still play at the Melbourne event, which is due to start on January 17.

“Players that are testing positive now will complete a period of time until they are no longer infectious and they’ll be fine,” Tiley told reporters.

PARIS: World number one Novak Djokovic has said he would like to return to play in Australia again despite being deported from the country earlier...
Read more
Sports

Sri Lanka has dethroned Pakistan from the fourth position in World Test Championship (WTC) points table as they secured a comprehensive victory against Bangladesh in Dhaka. The...
Read more
Sports

Pakistan captain Babar Azam has been chosen as Somerset's best-ever T20 cricketer in a fan survey done in the lead-up to the 2022 T20...
Read more
Sports

LOS ANGELES: Top-ranked Masters champion Scottie Scheffler fired a five-under par 65 to keep a share of the lead after Friday's second round of...
Read more
- Advertisment -