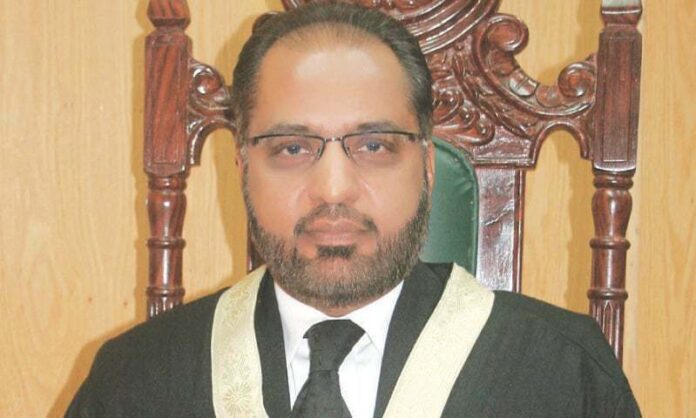 The Supreme Court (SC) on Monday expressed annoyance at former Islamabad High Court (IHC) judge Shaukat Aziz Siddiqui for his outburst in response to the apex court’s questioning, according to Dawn.

The former judge was removed on the recommendation of the Supreme Judicial Council (SJC) for “displaying a conduct unbecoming of a judge” after he delivered a controversial speech at the District Bar Association, Rawalpindi, on July 21, 2018.

He had accused some officers of the Inter-Services Intelligence (ISI) of interfering in the judiciary’s affairs and levelled allegations against the judiciary for undermining democratic norms in the country.

On Monday, a five-member larger bench of the apex court, headed by Justice Umar Ata Bandial, heard his appeal and asked the former judge why he had not issued a contempt of court notice in the matter. “Are these facts recognised by you that the general met you? If he had approached you, then why didn’t you issue a contempt of court notice to him?” Justice Sardar Tariq Masood asked the former judge.

Justice Masood asked Hamid Khan, the counsel for Siddiqui, why his client did not even inform the chief justice.

To this, Hamid said his client had sent a letter to the then chief justice, arguing that the apex court should have issued a contempt notice in the case.

In response to the question, which Justice Masood had directed at Siddiqui’s counsel, the former judge himself turned up at the rostrum to respond to the bench. “You should look at the situation at that time. The heads of institutions were after me,” he said. “What might have happened in case I had issued a contempt notice?” the ex-judge questioned rhetorically.

“The head of the institution (Supreme Court) at that time, Saqib Nisar, was also after me,” he told the bench, adding “If you want to hang me after this, then do so,” he said.

In response to his statement, Justice Bandial expressed annoyance at Hamid Khan, the petitioner’s counsel, for “deliberately keeping mum” as his client spoke. “The way your client is exploding is totally uncalled for”.

The counsel sought pardon from the judge, saying “emotions often overpower us”.

Justice Bandial said emotions have no value [in the court], adding “we did not like the stance of your client and you kept allowing him to ridicule the court”.

He asked Siddiqui’s counsel to tell his client to avoid talking when the lawyer is present.

Later, the court adjourned the hearing till Tuesday.