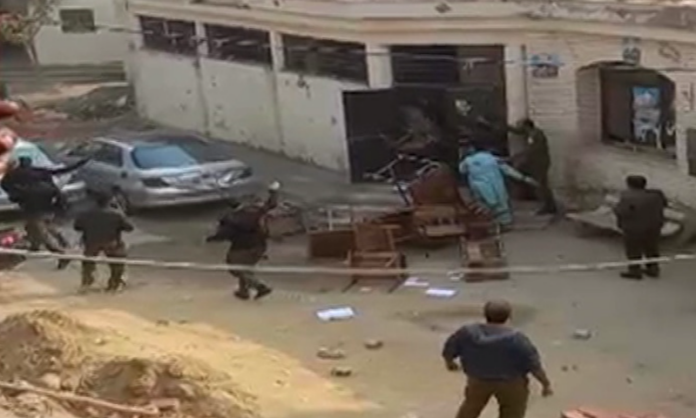 As many as 12 prisoners escaped from the premises of district courts in Lahore’s Model Town on Monday.

As per details, prisoners were brought to the courts for hearing from Kot Lakhpat and Camp jails. They were kept in the court lock-up by the police till the hearing of their case.

According to a report, Lahore SSP (Operations) Mustansar Feroze told media that the suspects were being kept in the court lock-up when a fight started between two groups.

“When the police officers brought the prisoners out of the [lock-up] to control the situation, they became unruly and also clashed with policemen, threw stones at them and attacked them with chairs, tables and other objects,” Feroze was quoted as saying in the report.

He said two out of the 12 prisoners have been arrested, while a search operation is underway to nab the others. He added that an inquiry is also being carried out so that disciplinary action could be taken against the police officials who might have shown “negligence”.

In a separate incident of the same nature reported in 2017, the under-trial prisoners, Shaikh Muhammad Mumtaz alias Firoon and Muhammad Ahmed Khan alias Muna had escaped from the judicial complex of Central Prison Karachi.

Startling revelations about the incident had indicated that the prisoners had escaped by breaking prison grill and changed their appearance in the judge’s bathroom. However, the jail staff had come to know about their escape later when they were supposed to be presented before the court inside the jail.

The duo was arrested by the CTD in 2013 for their involvement in dozens of targeted killings.