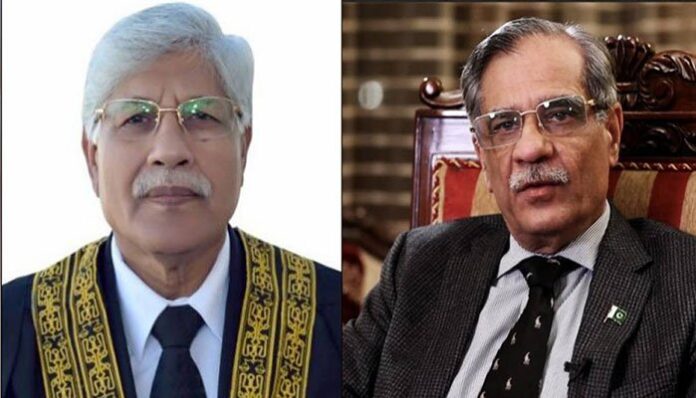 Former Gilgit-Baltistan chief justice Rana Shamim’s son Ahmed Hassan Rana has said that his father owns the affidavit he signed in London, in which allegations of judicial manipulation were levelled against the former chief justice of Pakistan Saqib Nisar, Geo News reported on Monday.

Former GB CJ had claimed that Saqib Nisar had told a high court judge to keep Nawaz Sharif and Maryam Nawaz Sharif in jail till the 2018 general elections. He had also alleged that he had heard the conversation when the former CJP was visiting GB before the 2018 elections.

According to the news outlet, Ahmed said that unfortunately, a section of media has “falsely reported that his father has distanced himself from his own affidavit.”

“He never said that he doesn’t own his affidavit. There was confusion and misreporting from the courtroom. My father said that he has not read what’s published in The News’ story. He said that he had not yet examined the leaked document; he didn’t say that he disowns his own affidavit,” Ahmed said.

He added: “I have already confirmed the same in my interview with Shahzeb Khanzada and during interviews with other channels. This affidavit has the same content that my father had signed.”

Ahmed further said: “I have seen the document and [they] are my father’s signature. I can confirm. I have said all along that it’s a genuine document.”

He said his father knew well the risks and consequences of what will happen when he signed the affidavit.

He said his father is aware that he can go to jail if he cannot prove it. “He knew the risks. He’s a former chief justice and vice-chancellor of a university. It’s not an easy thing to do. There is circumstantial evidence and he stands by it. I am also a witness to this circumstantial evidence. I am a hearsay witness and I will confirm it in the court if there is a judicial inquiry.”

It is pertinent to mention that Nisar had denied the claims and said: “I have never spoken to anybody or any high court judge in connection to any matter related to Mr Sharif.”