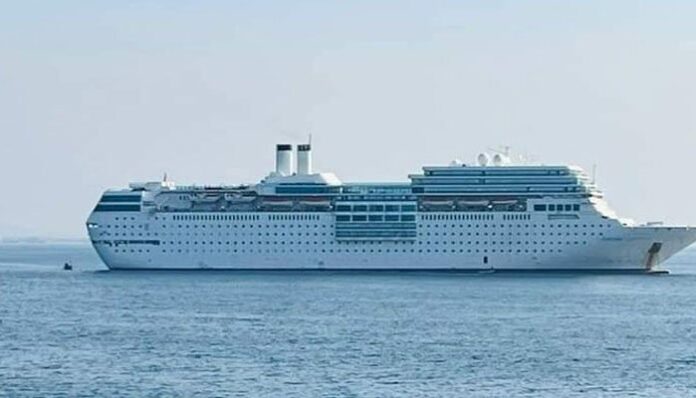 KARACHI: A magnificent 14-storey cruise ship is set to end its nearly three-decade-long journey at Gadani shipbreaking yard as, according to the owner, the country has no space to park the cruise ship.

Ahmedullah Khan, the buyer of the vessel, had requested the government to allow turning the ship into a hotel by docking it off the Karachi coast or use it for travel and tourism, saying that it is in “workable condition” for the next 10-15 years. But the authorities turned down the idea due to the size of the vessel.

Special Assistant to the PM on Maritime Affairs Mahmood Moulvi said that the cruise ship, which is bought by a Gadani buyer, has come for beaching.

He said that it will be beached as per the conditions of the contract, ruling out the possibility of using the cruise for a ferry services in the country. He said the condition of shipping lines in Europe is not good and they are doing away with ships.

Ahmadullah Khan, talking to a private television channel, said that he made efforts for the ship to provide recreation as he planned to turn it into a hotel or cruise to promote tourism. Originally, he purchased the ship to be dismantled in Pakistan, however, when he saw the ship in perfect shape, he changed his mind and thought of turning it into a tourist attraction.

However, he said, he contacted the Pakistan National Shipping Corporation (PNSC) and other authorities, but no place could be allocated for the cruise ship in the largest port of the country.

Khan said the Karachi Port Trust (KPT) chairman had assured him of cooperation. However, he later learnt that the ship cannot be parked in the post owing to shortage of space. He said that it will take at least 10 months to dismantle the whole ship and more than 500 workers will be directly involved in the process. He added that it is the largest cruise ever to arrive for scrapping in Pakistan. The dismantling of the cruise liner is expected to start next week.

Built for Italy’s biggest tour operator Costa Cruises in the early 1990s, the ship, weighing 56,800 gross tons, has 14 floors, 1,411 rooms, a seven-star hotel, shopping areas, gaming zones and three conference halls. It is going to be scrapped due to the impact of the coronavirus pandemic on the shipping sector. The ship was sold at $610 per LDT (Light Displacement Tonnage).