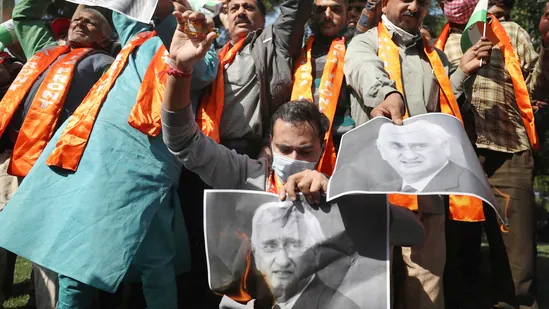 Congress leader Salman Khurshid’s book Sunrise Over Ayodhya has irked not only the Hindu extremists but also some moderate leaders like Ghulam Nabi Azad. The bone of contention is his comparison of  Hindutva to terror outfits with ISIS and Boko Haram. Some people pelted stones on Khurshid’s Nainital residence, before trying to set it afire. In viral videos, Khurshid says,’If you want to see what Hindutva does, see the burnt door in my Nainital home’. Mehbooba Mufti, former chief minister of the occupied Kashmir, and Rahul Gandhi supported Khurshid’s observations in the book. Mehbooba said, `Those who make Hindus and Muslims fight in the name of religion can be compared with ISIS or any other (terror group) because both of them kill people in the name of religion’. Referring to ‘Vasudhaiva Kutumbakam’ (the world is one family, as taught by Hindu scriptures), she said: “Sanatan Dharma teaches us that the world is one family. What BJP and RSS are trying to teach us is neither Hindutva nor Hinduism.”

She said Sananatan dharam teaches inclusivity and BJP is antithesis to that. Mehbooba clarified that the real Sanatan Dharma doesn’t teach communalism. She accused RSS-BJP combine of hijacking Hinduism and Hindutva, and making people fight against each other all over the country.

The world is unconscious about the undercurrents of Hindutva or Hindu  jihad in Indian politics. It is manifest from lynching minorities and legislativive steps to gag voice of minorities struggling for rights. Some political parties are exploiting Hindutva concept to hoodwink masses and win elections. Political gains are uppermost in BJP’s mind. It has agreed to withdraw controversial farm laws but will never withdraw anti-Muslim Citizenship Amendment Act and the National Register of Citizenship

Rahul Gandhi was questioned, ‘Is Hinduism about beating a Sikh, or a Muslim? And then answered ‘Yes, Hindutva, of course, is’.

The ‘Hindus’ were persons inhabiting the Indus valley area and beyond. The territory inhabited by them was Hindustan. But the communalistic Hindu calls the territory Hindustan (the Hindu’s place). The suffix ‘-stan’ being of non-Hindu origin is obnoxious to the communalists. The communalists find Bharatvarsha more palatable. This word originated from an ancient Hindu king Bharatvarsha. The communalists’ outfits like Sangh Parivar use this name preferentially as it emphasizes Vedic roots of the country and its original people.

According to the bulk of literature on the subject, `Hinduism’ is not a closely-knit or bounded faith or collection of doctrines. It is a religion (mazhab), not a deen, or a way of life without a founder. According to Encyclopedia Britannica 1994-2001: “Hinduism is both a civilization and a congregation of religions: it has neither a beginning nor a founder, nor a central authority, hierarchy nor organization. Every attempt at a specific definition of Hinduism has proved unsatisfactory in one way or another…”.

Hinduism does not have One Church, One Pope, One Prophet, One Holy Book or One Ritual. One can be a Hindu as well as a believer or an agnostic or an atheist!

Hinduism does not prescribe one system of marriage or one system of succession/inheritance. The Hindu law reforms (1955-1956) tried to bring about uniformity but diverse practices continue.

Hinduism allows a Hindu to worship other gods and saints. Thousands of Hindus go to worship at the shrine in Velankanni or pray at the Golden Temple in Amritsar or offer obeisance at the Dargah Sharif in Ajmer.

Hindutva is controversially defined in Vinayak Damodar Savarkar in his book Hindutva and adopted by Hedgewar as the basis of his ideology (An Indian parliamentary committee resurrected him as a hero by allowing his portrait to be hung in Indian Parliament). The RSS’s aims are a mix of cultural, religious and political objectives – To serve Hindu dharma (religion), sanskriti (culture) and rashtra (nation). Sarvarkar distinguishes ‘Hinduism’ from ‘Hindutva’. He clarified that the `Hinduism’ was concerned with `relevance of life after death, the concept of God and the Universe’. ‘Hindutva’, on the other hand, was ‘Hindus being a nation, bound by a common culture, a common history, a common language, a common country and a common religion’.

The book has brought into limelight the bitter reality that the majority of India wants a minority-  India. The feeble voices about peaceful existence are fading. The RSS, BJP and their ilk speak the same language.

While speakingmukt on the occasion of launching the Krishnanand Sagar’s  book ‘Vibhajan Kalin Bharat ke Sakshi’ (The Witnesses of Partition-era India), Bhagwat said, ‘India’s suffering at the time of Partition should not be forgotten and that it will go away when the Partition is “undone”. This is India of 2021 and not of 1947’.

He spoke in the same vein as had Pandit Jawahar lal Nehru and Vallabha Patel. Before his final flight (Aug 7, 1947) from Delhi to Pakistan, the Quaid sent a message to the Indian government: “The past must be buried and let us start as two independent sovereign states of Hindustan and Pakistan, I wish Hindustan prosperity and peace.”

Bu, Vallabhbhai Patel replied from Delhi: “the poison has been removed from the body of India.” Even Nehru, an ostensibly liberal leader, regarded the creation of Pakistan as a blunder. His rant against Pakistan reaches a crescendo in his remarks: “I shall not have that carbuncle on my back.” (D. H. Bhutani, The Future of Pakistan, page 14).

There is marked similarity between Bhagwat’s speech and Narendra Modi’s speech earlier. While delivering the Independence Day speech from the ramparts of the Red Fort on August 15 earlier this year, PM Modi declared, ‘August 14 will be observed as the ‘Partition Horrors Remembrance Day’. He described partition as “one of the biggest tragedies” of the last century.

The Indian government is making all-round preparation to wage war on China and Pakistan. Modi has inaugurated several airfiels in forward areas. The IAF is practising to take off from strategic roads in border areas. Besides, while protraying Pakistan as hub of terror India is itself  fomenting insurgencies in neighbourhood. Even the enlightened Hindu and the military writers believe that India’s prosperity during various periods of history, for example during the Maurya and the Gupta periods, rose or fell pari passu with rise or fall of military leadership.

Verse 193 of the Gita is no different from what Krishna taught Arjun. How is this any different from Lord Krishna telling Arjun in the Bhagavad Gita to fight as his dharmic duty?

BG 2.33: “O Arjuna! If you do not fight for this religion and turn away from your religion, then you will lose your fame and glory.” Surely, Hindus will know the context.

The Ramayanas and the Mahabharata wars elucidate various types of yuddha (wars). In ancient India there were three schools of war. Bhishma’s school of warfare belonged to dharma yuddha (ethical or just war). Two other schools, Brihaspati and Krishna’s school of warfare belonged to koota yuddha (all-out war) or maya yuddha (war by tricks or stratagems). There is too much of negative publicity about Islamic jihad (struggle). But, there is little limelight on koota yuddha in India’s history. Koota yuddha signifies all-out, no-holds-barred or unethical warfare.

The world is unconscious about the undercurrents of Hindutva or Hindu  jihad in Indian politics. It is manifest from lynching minorities and legislativive steps to gag voice of minorities struggling for rights. Some political parties are exploiting Hindutva concept to hoodwink masses and win elections. Political gains are uppermost in BJP’s mind. It has agreed to withdraw controversial farm laws but will never withdraw anti-Muslim Citizenship Amendment Act and the National Register of Citizenship.