Protest for rights continues in Gwadar 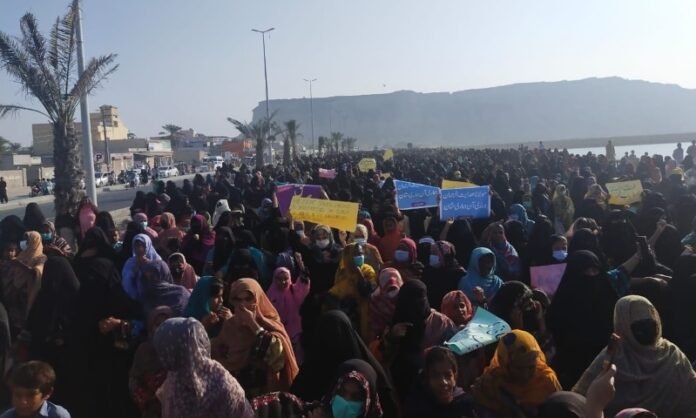 Thousands of people continued their protest in Balochistan’s Gwadar district for the 17th day on Wednesday, demanding rights, jobs, end to illegal fishing by trawlers, removal of additional check-posts at Pushkan, Sarbandan and Gwadar City, and opening of Pak-Iran border among other things.

Maulana Hidayatur Rehman Baloch, the secretary general of Jamaat-i-Islami’s (JI) Balochistan chapter, is leading the Gwadar Ko Huqooq Do Tehreek (Give Rights to Gwadar Movement), in which people from Gwadar, Turbat, Pishkan, Zamran, Buleda, Ormara and Pasni are taking part.

Earlier on Sunday, Balochistan Minister for Planning and Development Mir Zahoor Ahmed Buledi, who is heading the government team for talks with the protesters, said that the demands made by Baloch had been implemented to a great extent — something he said Baloch had also acknowledged in his speeches.

The minister called on him to show more flexibility in negotiations.

According to Dawn, Buledi said eight trawlers have been seized so far and asked Rehman to send a representative if he does not have trust in the government, besides sharing that the Balochistan government would also discuss the trawler issue with the Sindh government.

He said that wine stores have been shut in the district in line with the demand of the protesters. “The government is serious about the Maulana’s demands. When the negotiations with the administration failed, ministers, including me, went to Gwadar.”

He asked Maulana to keep open the door on talks and give the government some time as some of the demands require legislation.

“We told the Maulana that our purposes are the same — to serve the people.”

Last week, the Excise, Taxation and Anti-Narcotics Department had ordered the closure of all wine stores in Gwadar district with immediate effect in view of the “law and order situation”.

The notification was shared by Buledi on Twitter, who said the decision was taken after negotiations with JI’s Baloch.

Meanwhile, Beijing termed media reports about anti-China protests in Gwadar as “fake news” and said the reports are aimed at smearing ongoing China-Pakistan Economic Corridor (CPEC) work in the region.

According to a report, Chinese Foreign Ministry Spokesperson Zhao Lijian said: “The report by certain media on anti-China protests in the Gwadar region is completely groundless. It has been verified that there are no Chinese trawlers harboring in the Gwadar Port or fishing in relevant waters.”

“I would like to reiterate that the Gwadar Port, a flagship project under CPEC, always focuses on development and is livelihood-oriented. The Chinese side upholds the principle of mutual respect and agreement through consultation in advancing relevant cooperation,” he elaborated.