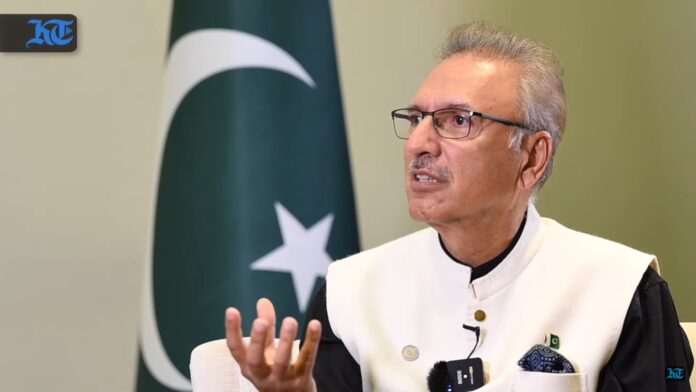 ISLAMABAD:President Dr Arif Alvi on Wednesday gave his assent to the Protection of Journalists and Media Professionals Bill to safeguard the rights of working journalists.
The President signed the legislation at a ceremony attended by cabinet ministers and a large number of journalists and media professionals.
The bill focused on protecting lives of journalists, saving them from harassment and torture and ensuring their welfare by giving facilities of life and health insurance.
The President said he was very happy to sign the historic bill.
He said for the last 60-70 years, the journalists raised issues and after which mafias of all kinds killed, harassed and tortured them.
The President underlined the need for a culture of tolerance for journalists because they were only doing reporting and disseminating information.
As people did not want that their mistakes should be exposed they put pressure on the journalists, he noted.
The President said he came to know that a consensus was built among the stakeholders on the bill.
Everybody was unanimous in protecting the rights of journalists, he stressed.
While explaining features of the act, he said the act gave protection of life to journalists. This right to life was important as the journalists worked in hazardous conditions and with neutrality, he added.
The President said that the government and the media owners had now more responsibility to protect the lives of journalists.
The act also protected the journalists’ right to not disclose their information which was important for maintaining freedom of expression, he added. The act also provided a comprehensive definition of journalists and media professionals.
The President said debate on disclosure of information would continue in the society in future as well. He said the act also gave journalists independence, adding the law also protected journalists against intolerant behavior, violence and harassment.
Under the act, welfare of the journalists would be ensured and an independent media commission would be
formed.  The act would also take care of the protection of rights of the genders.
He said fake news was an issue and Holy Quran also warned against fake news as it could create chaos and wars between the nations.
The war in Iraq happened due to fake news about the weapons of mass destruction, he added.
The President said that the damage was also done to Afghanistan due to fake news and now in this age, the instruments and efficacy of news mediums had changed and fake news were more prevalent.
India had also attacked Pakistan with fake news, he asserted.
He said in the past when the media organizations were few there was trust that all the news would be true but now in the social media age, 60-70 percent of the news were fake.
The President was apprehensive that social media might also affect the outcome of elections in future.
He said media personnel had the responsibility to counter fake news. Social media had become very strong even stronger than nations in spreading of news, he explained.
He called for practicing of responsible journalism to protect rights of society and not to report statements out of context. Reporting out of context statements was not fair.
After signature of the President, the bill had become an act of the Parliament.
Earlier, Minister for Information and Broadcasting Chaudhry Fawad Hussain in his remarks said the government would support the working journalists and would strive to protect their rights.
Media owners had also the responsibility to protect lives and jobs of journalists, he added. He said independent media commission would be instrumental in safeguarding the journalists.
Minister for Human Rights Shireen Mazari in her remarks said the new law was progressive in nature and gave insurance of life and health to the journalists and media professionals.
Facebook
Twitter
Linkedin
WhatsApp
Email
Previous article
Protest for rights continues in Gwadar
Next article
India’s hybrid warfare: against Pakistan