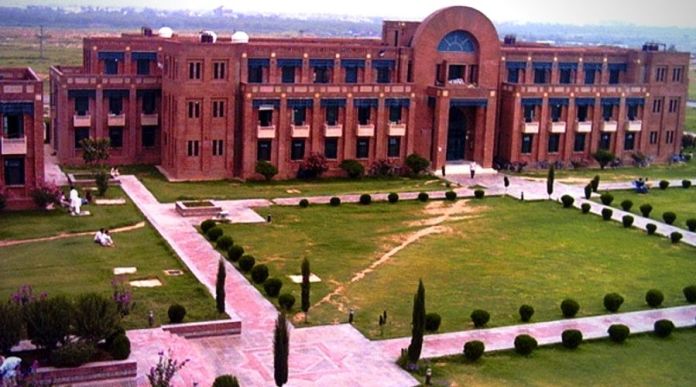 The ASA alleged that the QAU VC is seeking exit a year before the end of his tenure, through his candidature for the post of VC at three regional public sector universities in Punjab.

“The QAU is a difficult university to manage, with an assertive faculty and students who come from all parts of the country due to admission on quota basis. In 2020 also, the incumbent VC had tried to leave QAU and seek job in the provincial higher education sector.

But he was refused NOC by the Federal Ministry of Higher Education and Professional Training, and asked to complete the remaining tenure at QAU,” states the flyer issued by a panel of the faculty contesting the Academic Staff Association (ASA) elections on Tuesday.

In a WhatsApp messages, the QAU VC said: “If they refuse NOC then how can I leave. This is their political mimics which they want us to use for their elections.”

He added that they should come up with something concrete which they do not have as these are always believers of disruptive politics and known for their lies.

They said that no substantive reforms of any part of the QAU setup have been contemplated, let alone enacted, over the past three years. The ASA is expected to proactively work to tackle the current university crisis.

They alleged that earlier this month, the Senate Standing Committee on Federal Education and Professional Training had also expressed its disappointment on the serious decline of academic standards at QAU and 31 other public sector universities in the view of the Higher Education Commission. Of particular concern is the recent report by an international agency, Retraction Watch, about several instances of plagiarism in journal articles, including at QAU.

They stated that the incumbent Vice Chancellor is under scrutiny for his own confessions about the encroachment of 700 acres of university land made before the National Assembly Standing Committee on Federal Education and Professional Training and about the open sale of drugs on campus huts made before the Senate Standing Committee on Narcotics Control, as the QAU administration has done nothing to enforce the Supreme Court’s 2017 decision to seek the help of the Capital Development Authority in vacating the previously grabbed land from illegal encroachers.

He added that recently another prestigious ranking agency Times World University Ranking placed QAU among the top 100 Asian universities, besides resolving the longstanding accreditation issues of the Department of Law and Pharmacy programs.

He said that PSDP Projects of RS. 2074.170 million was initiated including academic blocks, hostels and research labs, besides distributing scholarships worth Rs. 232.8 million among students in the financial year 2020-21.

Hamid Khan Wazir
The writer is a member of Pakistan Today's Islamabad bureau. He can be reached at [email protected]

ISLAMABAD: In an important development in the couple's torture and harassment case in sector E-11 of Islamabad, a court here on Monday rejected the...
Read more
ISLAMABAD

ISLAMABAD: The Capital Development Authority (CDA) has decided to use drones for protecting forests and wildlife in the federal capital. According to CDA, its would...
Read more
ISLAMABAD

RAWALPINDI: The body of Wajiha Swati, a US citizen of Pakistani origin who went missing from Rawalpindi in October, has been found, police said...
Read more
ISLAMABAD

ISLAMABAD: Federal Capital Police Wednesday booked an official of the Senate secretariat who was allegedly caught on video filming and harassing women in the...
Read more
- Advertisment -