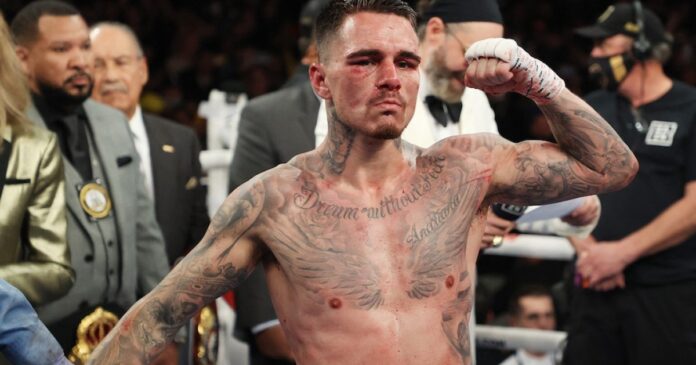 Both boxers came into the fight undefeated but Kambosos, who survived a 10th round knockdown, made sure he was the one to leave with the 135-pound straps.

The 28-year-old Kambosos snatched the WBA, IBF and WBO belts in a close slugfest at New York’s Hulu Theater at Madison Square Garden that left both fighters bloodied and bruised by the end of the 12th round.

“I wasn’t hurt,” said Kambosos of the knockdown. “I said to my corner ‘Let’s go hard. I am going to punish this kid.'”

The American-Honduran Lopez was coming off a career-long 13-month layoff for a fight that was a year in the making.

The soap-opera buildup to the showdown included eight postponements, six proposed locations and numerous legal challenges because of in-fighting between boxers, promoters and lawsuits.

There were fireworks from the opening bell as Kambosos knocked Lopez down in the first round. The pair both landed several hard rights in the round, but Lopez got caught with a looping overhand right to the temple that Kambosos would go back to over and over with great success throughout the fight.

In the 10th, Lopez knocked Kambosos down with a chopping right hand of his own halfway through the round.

Lopez suffered a bad cut over his left eye in the 11th and the fight was stopped briefly so the ring doctor could take a look at it. The fight continued into the 12th as Lopez’s corner was unable to stop the bleeding between rounds.

Lopez interrupted Kambosos’ post-match interview to say he was robbed and only lost two of the 12 rounds. Kambosos responded by saying “you are delusional.”