Too much has been postponed to the next conference 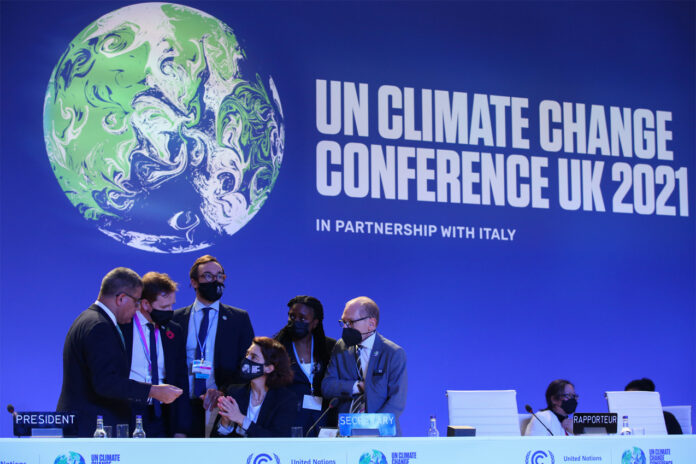 ‘After COP26, it is clearer than ever that top-down pledges and policies are not enough. Rather, we need a structural and institutional transformation from the ground up. Our only hope of keeping global warming within “safe” limits (in fact, the agreed target is much safer for some than for others) is to accelerate a green transition with massive, coordinated public investment aimed at innovation leaps and an economic paradigm shift.’– Excerpt from a recent Project Syndicate (PS) published article ‘The right institutions for the climate transition’ by Mariana Mazzucato

The COP26 summit that took place in Glasgow, culminated in a ‘Glasgow Climate Pact’, the main features of which were highlighted for instance by an Economist published article ‘COP26 ends with a pact that is neither a triumph nor a trainwreck’ as follows: ‘More than a day after it was meant to finish, COP26 finally came to an end, with 197 parties agreeing to the newly-dubbed “Glasgow Climate Pact”. There were several notable achievements. Countries committed themselves to further accelerating their decarbonisation plans and, specifically, to strengthening their emissions-reduction targets for 2030 by next year, rather than in 2025 as per the five-year schedule set out under the Paris agreement. Developed countries were “urged” to double funding for adaptation in developing countries by 2025. Rules to create a framework for a global carbon market were approved, settling a problem that had plagued negotiators since 2015. The need to reduce global greenhouse-gas emissions by a whopping 45% by 2030 was formally recognised. Not the stuff of triumph; but not a trainwreck, either.’

While COP26 ended with overall commitment through ‘Glasgow Climate Pact’ to keep moving towards limiting global warming to below 1.5°C, yet the steps agreed upon sadly to do not ensure reaching this global warming target, as pointed out by a Guardian published article ‘COP26 ends in climate agreement despite India watering down coal resolution’ as: ‘The “Glasgow climate pact” was adopted despite a last-minute intervention by India to water down language on “phasing out” coal to merely “phasing down”. The pledges on emissions cuts made at the two-week Cop26 summit in Glasgow fell well short of those required to limit temperatures to 1.5°C, according to scientific advice. Instead, all countries have agreed to return to the negotiating table next year, at a conference in Egypt, and re-examine their national plans, with a view to increasing their ambition on cuts.’

This foot-dragging by countries on important climate change steps is indeed worrisome, as the existential threat of climate change is fast unfolding.

In another article ‘Third draft of COP26 text retains key goal of limiting global heating to 1.5°C’ published by The Guardian, it was pointed out that COP26 was not able to bring countries to much-needed commitments and specific details. The article indicated in this regard ‘Nations will be asked to return next year to strengthen their targets on emissions cuts, which are so far inadequate, and to accelerate the phase-out of coal power and fossil fuel subsidies.’

Another issue was the lack of clarity at COP26 on specific mechanisms whereby needed climate finance will be provided to developing countries, especially those which were most vulnerable against climate change. Moreover, the summit did not clearly define what would constitute climate finance, so there was a lack of clarity in this regard also. In a PS published article ‘The rich world’s climate hypocrisy’ by Jayati Ghosh, it was pointed out in this regard: ‘Rich countries, which are responsible for the dominant share of global carbon-dioxide emissions to date, are dithering on longstanding commitments to provide climate finance to developing countries. They are also resisting a proposed operational definition that would prevent them from fudging what counts as climate finance. …A group of 20 countries, including the USA, pledged to end public financing for “unabated” fossil-fuel projects, including those powered by coal, by the end of 2022. But the prohibition applies only to international projects, not domestic ones. Significantly, the USA and several other signatories refused to join the 23 countries that separately committed to stop new coal-power projects within their borders and phase out existing coal infrastructure.’

This foot-dragging by countries on important climate change steps is indeed worrisome, as the existential threat of climate change is fast unfolding. A Guardian published article ‘There has been progress at COP26, but the planet’s fate is still in the balance’ points towards the seriousness of matter with regard to climate change and global warming, and the need for taking urgent and meaningful steps, the situation is calling for. The article indicated in this regard: ‘At present, most analysis indicates that we are heading for a greater rise, around 2.4°C, a level of heating that could have devastating consequences for low-lying nations– including many island states in the Pacific and Caribbean. They face major sea-level rises triggered by melting ice sheets in Greenland and the Antarctic. At the same time, across the globe, storms could worsen, heatwaves increase in number and intensity, and floods and droughts spread– unless we follow up Cop26 with tighter and tighter deals. Whether we can now avoid breaking the 1.5°C limit is therefore an issue that still hangs in the balance after Glasgow. Over the next 12 months nations are now going to be called on to announce individual, tighter emission goals.’