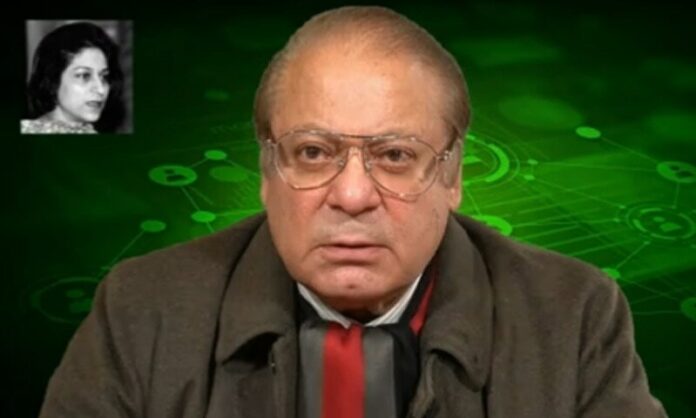 LAHORE: Former Prime Minister Nawaz Sharif Sunday called for immediately devising a national agenda to pull Pakistan out of its current crises and take it on the path of democracy, reiterating the need to “put our house in order”.

Addressing the participants of Asma Jahangir Conference, the former premier once again hit out at the military establishment and criticised interference in judicial and government affairs that he claimed had led to Pakistan’s ‘downfall’.

He said the current era that Pakistan was going through was a ‘turning point’ in its history.

“The most dangerous aspect is the deepening disappointment and severe helplessness [among the people],” he said, adding,”History is witness that when nations descend into the quagmire of despair, questions start to be raised about that nation’s survival.”

He said the 220 million people of Pakistan were demanding answers to some fundamental questions and until they received those, the country’s state of affairs would not improve.

“If the questions being raised are muzzled, this does not resolve problems,” he added, likening the allegedly deliberate internet disruption during his speech to “muzzling [our] voice”.

“Will this solve problems? And then picking up those asking questions and disappearing them, will that end the questions? Unfortunately, the current era has proven to be the blackest for freedom of speech and human rights.”

Nawaz said regional and international circumstances had accentuated Pakistan’s need to “correct ourselves”.

“That is why I said repeatedly that we have to put our house in order and we should open our eyes. Then the drama of ‘Dawn leaks’ was staged against us, punishments were given to us through fake cases, and then you saw how [we] were humiliated,” he told the audience.

But Sharif said the time had come for the voices present at the event to “gather on one platform and draft a national agenda and give it the shape of a national movement”, for the sake of the rule of law and democracy.

“My suggestion is that [based on] all the recommendations given in this conference, an immediate strategy be formed and everyone sit together, so that the path of practical struggle can be adopted. It is very important. We have been too late and cannot afford more delay. This work should be done today,” he stressed.

Taking action now, Nawaz said, “can help pull the country out of the chasm it has fallen into and put it on the path of its destination again”.

“If this is not done, then lifting it again will become impossible and history will not forgive us.”

The organisers of the Asma Jahangir Conference condemned the alleged “muzzling” of PML-N supremo Nawaz Sharif’s speech on Sunday, after internet services at the venue were reportedly suspended soon after his address began.

Nawaz began his speech — relayed from London via video link during the closing ceremony of the keenly watched conference held in Lahore — by paying tribute to the late celebrated lawyer and human rights activist Asma Jahangir, but the live stream abruptly stopped shortly after.

In a statement issued after the event, the organisers regretted what they termed “the state’s highhandedness” for allegedly blocking Nawaz’s speech.

“The organisers of Asma Jahangir Conference 2021, which include the Supreme Court Bar Association, Pakistan Bar Council, and the AGHS, strongly condemn this act and consider it an onslaught on the freedom of expression.”

When reached for comment on the allegations, federal Information Minister Fawad Chaudhry said he was not aware of any such move by the authorities. Meanwhile, Punjab government spokesperson Hassan Khawar did not respond to the request for comment.