And Pakistan chiming in? 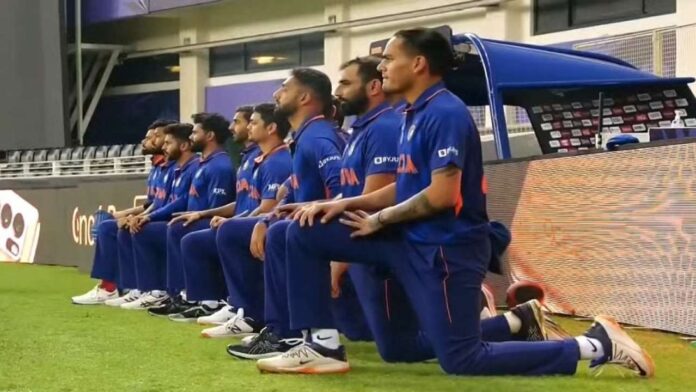 Before its match against Pakistan began on 24 October, the Indian cricket team ‘took the knee’ on the field, in what is by now an internationally recognised gesture against racism. The Pakistani team expressed their support of this gesture by placing their hands across their chest, à la Ertugrul Gazi.

The gesture has been received with raised eyebrows, given India’s human rights violations, against Kashmiris, and against Muslims, and because of verbal attacks on Mohammad Shami, the only Muslim player in the Indian team, after the match.

Referring to this event, Andrew Bolt of Sky News recently spoke about how India should fix its own record before making grand international statements against racism. He was speaking specifically about India’s caste system, in which Brahmins have the upper hand, followed by others on a descending scale ending last of all in the untouchable class composed of the Shudras and the Dalits, whose lives are a dreadful tale of survival despite discrimination.

What makes us think we can place our hands over our hearts and make a statement against racism? What allows us to condemn India as our people and politicians have been doing, as a matter of course as well as following the cricket match?  And just what allows us to point fingers at racism when it takes place anywhere else in the world?

There must be several people on both teams, let us presume all of them, who have their hearts in the right place with regards to racism. Neither team had much choice in making this gesture. It has been said that the Indian team did what they did upon instructions from the Board that manages the event at their end. And the Pakistani team understandably had to chime in.

Be that as it may, what concerns us is the Pakistani team and its support of the anti-racist sentiment.

Any country’s national team, even if it is a sports team, represents the country, which means it represents what the country stands for, so the question arises: does Pakistan stand for racial equality?

Certainly, given the political rhetoric against India in this country, you would imagine that Pakistan itself is free of racism. That would be a highly erroneous perception. It does not, despite its constitution, despite the religion of the majority of its people, and despite the image it likes to project.

The foundation of Pakistan and its people being free to go to their temples, mosques, or other places of worship has long since been overridden by certain amendments. That brings one to the religion.

The majority of Pakistanis claim to be Muslim, a religion that at its inception made a gift of freedom against racism and any kind of bigotry to all humanity. And yet, here in Pakistan, that gift has in effect been thrown back into the hands that gave it.

In Pakistan, other forms of racism aside, the caste system is alive and thriving. Conveniently cloaked in terms such as ‘brotherhood’ (baradari), it is difficult to see how the caste system in the Punjab, consisting of Rajputs, Arains, Dogars, Butts, Bhattis and all that bull differs to the caste system among Hindus. People who number themselves as one or other of these ‘castes’ often have the fact written across their cars, and tend to prefer to marry someone from the same caste as themselves. As for Syeds, that is another ball game, hilarious if it weren’t so dreadful, and so belittling of him from whom members of the caste proudly claim descent. The people who bestow that title upon themselves often, (there are as always many exceptions) prefer to marry only within themselves, and yet DNA tests conducted upon some of them in the sub-continent indicate that they have no connection with any Arab, let alone any particular person hailing from that region. And even if they did, if the supposed head of that family held no illusions of superiority for his family or himself based on that lineage, if indeed he condemned such things, nothing justifies the existence of that illusion among many of his so-called descendants.

Far from the government making the slightest move to change this mindset, the land documents issued by the government of Punjab require a person to state his or her caste. If this isn’t racism, our Interior Minister is a level-headed man.

One can name many shameful incidents, such as those against Pakistan’s minorities, the Christians, the Hazara, the Shias and the Ahmadis.

Let us never forget the Christian colony that was burnt down by a rabid mob, and the Christian couple that was burnt alive in a kiln, or the fact that our Nobel Laureate Abdus Salam was drummed out of the country because he belonged to a much-persecuted, discriminated against community, even by law. Just, you know, as Muslims are discriminated against in India, because they belong to the community they belong to, a discrimination our government and people protest vociferously against.

And most recently, there was the case of the Ahmadi student who was expelled from the University that had given him admission on a minority quota.

Mind you, this was not the first case. In 2008 23 students were expelled from a college in the Punjab. Not for any misdeed, but because they happened to belonge to the Ahmadiyya community. And that took place less than a month after the National Assembly of Pakistan reaffirmed its commitment to uphold the interests and rights of all minorities within the country in front of the United Nations Human Rights Council.

The most recent incident mentioned above took place this month, when the Bahauddin Zakaria University located in Multan suspended a young man’s admission without informing him or giving a reason for the suspension. It was a relief when the Lahore High Court set aside the decision, saying that it ‘amounted to persecuting the already persecuted.’ One would like to know if any measures are planned against those responsible for these actions in the University.

These events mentioned above are only a very few of the racist acts that take place in Pakistan, acts that bring shame upon all Pakistanis, and upon all those who call themselves Muslim, human or decent.

So, what makes us think we can place our hands over our hearts and make a statement against racism? What allows us to condemn India as our people and politicians have been doing, as a matter of course as well as following the cricket match?  And just what allows us to point fingers at racism when it takes place anywhere else in the world?