‘I am German when we win, but I am an immigrant when we lose.’ Mesut Özil, German footballer of Turkish descent 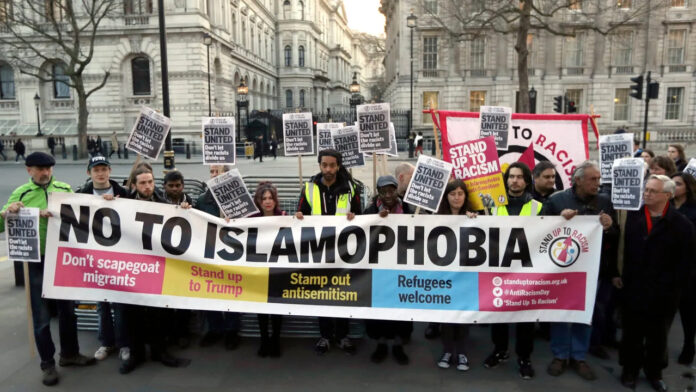 The history of racial bigotry and bias against a particular community has always been a norm of the so-called civilized people of the world. One class is victimized to foster the interests of another class and provide them with a guise to hide their nefarious agenda.

Islamophobia is one such ideology that is severely misused by the West to veil its heinous crimes.

Looking at the history of Islamophobia, there is some credibility in the presumed fears among westerners against Muslims. Still, by digging deeper into the facts, it becomes apparent that there is no truth in those assertions.

Islam’s inception right after Judaism and Christianity gave birth to perpetual conflict between these religions. One equated another one with false religion and vice versa. This religious bigotry was acquainted in the minds of Western people by using cultural dogmas like the backwardness of Arabs, paganism, and their unwillingness to create a milieu where Westerners can easily compete with them. The annals after the seventh century AD are full of such examples and exhibitions.

The conquest of Spain by the Muslims also left indelible marks on the minds of the natives that Islam is a religion of violence and forced conversion. As a result, their abhorrence of Islam slowly and gradually morphed into a deep stigma still haunting their consciousness.

The Renaissance writers also did nothing to chart out the natural causes of these erroneous notions. They helped their leaders to propagate writings against the Ottomans to augment military prowess because they were their main adversaries at that time. The Ottomans’ treatment of their subjects in the Balkans aggravated the conditions further. Between 1911 to 1979 was a period of great turmoil in communism and the liberal world order, thereby clouding the islamophobic trends.

However, as soon as the USSR collapsed, the book was written by Samuel P Huntington glaringly put the world into another discord— the clash of civilizations. He vociferously pointed out certain antithetitical and antagonistic ideologies to the liberal world order- Islam was the kernel preoccupation.

Lastly, the attitude of the Muslim world in general and Muslims, in particular, is crucial for the rencostruion of Islam. Muslims must focus on representing themselves as a torchbearer of the upbeat version of Islam. Intellectuals must write about the openness of Islam, and Muslim countries must strengthen their economic clout to make them heard through their platforms. This is the way forward, or the situation will worsen, and Islamophobia is going to increase.

The West has always been at crossed swords with the East in exemplifying itself as a brand of revered and epitomized values, thereby alienating all other credos. In the aftermath of 9/11, the world witnessed another horrifying onslaught by the extremist sections of Islam, who challenged the oppressions and marginalization caused by the liberal system. In essence and historically, liberalism is only a lacklustre ideology that needs hypothetical enemies to wage war against them and further the interests of capitalist elites.

The recent example of the AUKUS pact is a glaring example of this subpar ideology; communism is being targeted for being inhuman and antithetical to fundamental rights, while in the true sense a war against China’s supposed ascent as a global power. All-powerful countries employed this egregious agenda to substantiate and validate their violations of sovereignties by using a phony version of Islam.

They scrutinized the closed version of Islam and propagated it through their political and media platforms. As a a result, a perverse mindset against Muslims stigmatized Muslims in the minds of the common populace. They used the orthodox version of Islam, which ostensibly involved the imposition of Sharia law, no rights for women, use of coercive measures by Muslims to spread their ideology, and the moral corruptness of a few, to portray an altogether negative image of Muslims.

Their media and other news outlets also contextualized Muslims as people of the Neolithic age having no civility. This is the one side of the picture; the other side depicts the dismal approach adopted by the Muslim countries themselves to nullify this sinister and ominous proposition. The predicament got worse day by day.

Muslims lacked unity, and their platforms like OIC acted as a dupe where the euphemism of words was the primary tool to counter these perennial threats. Their response was mild and less intense towards the biased attitude of people from a country considered a city on a shining hill, most of the time because their economic interests were associated with them. Intra-Muslim battles, mistrust among them, and division of Muslim countries further aggravated the plight of the Muslim ummah.

The inception of right-wing populist leaders further exacerbated the turmoil and assaulted Muslims and immigrants vociferously to gain a victory in their elections. Muslims were castigated in political debates and talk shows, and President Donald Trump even banned Muslims from the USA. The attacks in New Zealand influenced by white supremacists and racial bigotry, the attacks in Canada, the unapologetic and the discriminatory ban on Muslim women’s veils  in France unveiled the superficial nature of secularism.

The time to rectif0y and reconstruct things to repair these nefarious attitudes, has come. They have done more harm than good to the peace of the world. How can the idea of an egalitarian world materialize, when one nation isn’t ready to accept another area based on untruthful and specious notions.

The following actions can help to rejuvenate the idea of universality.

First and foremost is an equitable approach by the Western leaders towards Muslims. Take the case of China’s Uighur Muslims; every other leader finds it very comfortable to criticize China’s ill-treatment, but they lack words and mettle when it comes to charging their unlawful atrocities. Their invasion of Muslim countries, the fiasco created by them, the covert support of various armed groups are glaring examples of their bigotry. They wreaked havoc in almost every part of the world. What if the victim of a drone attack whose whole family is brutally carangid takes up arms and chooses the violent way to avenge those cold-blooded murders? Will you call him a terrorist?

A Muslim’s violent act is deemed terrorism, but what about the acts of a national of their own country? Fair treatment of every violence can settle matters.

Secondly, it needs to be understood that no ideology and no religion is extremist. It is the people, its particular version, which, of course, doesn’t represent the whole ideology, is terrorist. They have a negative attitude, and sometimes they are merely puppets of world superpowers. The Taliban were good against communism, but they stood against the liberal world order to safeguard their homeland. They were seen solely through the prism of Muslimhood.

Lastly, the attitude of the Muslim world in general and Muslims, in particular, is crucial for the rencostruion of Islam. Muslims must focus on representing themselves as a torchbearer of the upbeat version of Islam. Intellectuals must write about the openness of Islam, and Muslim countries must strengthen their economic clout to make them heard through their platforms. This is the way forward, or the situation will worsen, and Islamophobia is going to increase.

Faysal Hayyat
The writer can be reached at [email protected]