Why do Kashmiris observe October 27 as the darkest day? 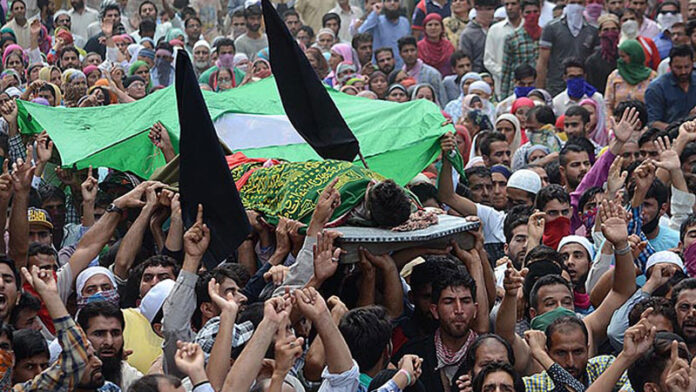 Kashmiris in Indian occupied Jammu and Kashmir, Pakistan and around the world are yet again observing October 27 as the darkest day of their history as a continued protest against the occupation of their territory which India had forcibly taken over on this day way back in 1947.

The long unresolved Kashmir dispute remains a source of lingering tension and conflict between India and Pakistan which had originated when the people of Jammu and Jammu were denied their fundamental right of self-determination after the partition of the Indian sub-continent and the emergence of two separate independent states of Pakistan and India on 14 August 1947.

At that time, it was generally presumed that Kashmir as a contiguous state with a predominantly Muslim population would accede to Pakistan. However, its ruler, the Hindu Maharaja Hari Singh, fled to New Delhi in the face of local residents’ protests, and   through an improper and illegal Instrument of Accession acceded the territory to India on 27 October 1947. The same day India had airlifted its forces in Srinagar and forcibly occupied the Valley against the aspirations of the Kashmiris.

This in brief is the background why the Kashmiris everywhere and the freedom and human rights loving people all over the world who support them, including Pakistan, observe October 27 every year as the Black Day to mark this as the darkest day in their history.

This year, for the 74th consecutive time, the Kashmiris are observing the darkest day on October 27 in changed circumstances, following revocation of special status of Jammu and Kashmir on 5 August 2019 through illegal amendments to the Indian Constitution by fascist regime of Narendra Modi, merging the territory into the Indian Union as its integral part.

Since 5 August 2019 when India revoked the special status of Indian-Occupied Kashmir and placed the territory under military siege, raising the strength of occupying security forces to 900,000, the Indian troops have killed 273 innocent Kashmiris to date, another 1539 were injured with most of them having sustained pellet injuries.

Over 2000 people, including Hurriyet leaders, activists and youth were facing illegal detention and lodged in different jails in the occupied territory and India.

For the last 74 years, India has illegally occupied Kashmir against the wishes of the Kashmiri people and in blatant violation of the UN Security Council resolutions and indeed its own commitments to the people of Kashmir.

Through the determined efforts of Pakistan through its Prime Minister Imran Khan, the Kashmir issue has been activated in the UN Security Council after more than five decades. The PM had highlighted the Kashmir issue and the dangers it entailed by remaining unresolved through his three successive addresses to the UN General Assembly in 2019, 2020 and 2021 also.

As such, the Kashmir issue is now being discussed at all international forums, thrice at the UN Security Council during last year,  Indian security forces brutalities and atrocities in the occupied territory are being condemned , the Indian government is being asked to take measures for restoring normalcy there and implement UN Security Council resolutions and accordingly hold a free, fair plebiscite to let the Kashmiris exercise their birthright of self-determination and decide their future themselves.

But it is rather deplorable as well as condemnable that the international community, topped by the world body, does not pressurize India in any manner more than its condemnation as everyone has their own vested financial and economic relations with a big country like India.

Not only has the longest military siege paralyzed the entire Valley with educational institutions and health facilities closed and not available and the territory remaining as a no-go area for all foreigners including diplomats and media people, but the longest lockdown in mankind’s history continues unabatedly in IIOJK.

Furthermore, besides the Indian security forces brutalities and atrocities the persistent military siege is being followed by intentional moves to change the demographic structure of the occupied territory as a brute attempt to obliterate the distinct Kashmiri identity in order to affect the outcome of a plebiscite envisaged in the UN Security Council resolutions.

This action by the Narendra Modi- led Indian government is in violation of the UN Charter, the Security Council resolutions and international law particularly the Fourth Geneva Convention, as changing the demographic structure of territory is a war crime.

The Indian government is settling Indian Hindus in the territory in the garb of immigrant Kashmiri Pandits.

Indian troops in their unabated acts of state terrorism in Indian-Occupied Kashmir have brutally killed almost 100,000 Kashmiris, including women, since January 1989, 7149 of the victims being killed in fake counters or while in custody.

As the Indian occupation of its occupied Kashmir continues without the UN Security Council resolutions being implemented the indigenous, unarmed struggle for freedom by the Kashmiris is also going on till they achieve their cherished objective of freedom from Indian shackles.

Pakistan has been extending full political, diplomatic and moral support all along to the Kashmiri people and will continue supporting their indigenous, just legitimate struggle for securing their right of self-determination as enshrined in the relevant UN resolutions.

A peaceful, negotiated settlement of the lingering Kashmir issue in accordance with UN resolutions has been and remains on top of Pakistan’s foreign policy. Without resolving the Kashmir issue, the agenda of the partition of the Indian Subcontinent remains incomplete as Kashmir is regarded as the lifeline of Pakistan.

It is an internationally accepted and acknowledged fact that Kashmir entails global danger in itself of spiraling nuclear and missile proliferation in both India and Pakistan coupled with their respective domestic instabilities and historical animosities.

India can kill the Kashmiris but not their aspirations for freedom which they will never surrender. India should honour its promises of giving the right of self-determination to the people of Kashmir who have already rendered endless sacrifices for freedom from illegal Indian occupation, while international community must take concrete steps to end Indian occupation of the held Kashmir and must intervene to resolve the lingering   Kashmir dispute peacefully to ensure durable peace, progress and prosperity for the people of the region.

India is bound under the international law not to change the demography of Indian-Occupied Kashmir and the international community must forestall this move and try to exert all possible pressure on India’s fascist regime to honour its decades-old commitment implement UN Security Council resolutions and let the Kashmiris exercise their birthright of self-determination.

Dear President Erdogan, I send this open letter to you because it pains me to see a country like Turkey, which could have reached the...
Read more
- Advertisment -