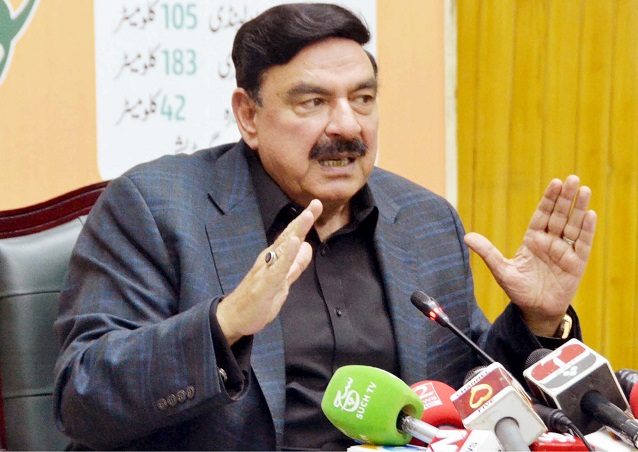 Federal Interior Minister Sheikh Rashid said on Thursday that the French ambassador cannot be expelled from Pakistan at the request of Tehreek-e-Labbaik Pakistan (TLP).

The interior minister’s remarks came a day after the organisation’s members staged protests for the release of party chief Saad Rizvi, as well as against ‘arrests’ of fellow party members.

He was addressing police passing out parade ceremony wherein he calmed that no one was a ‘greater soldier of defending finality of Prophet (PBUH) than him’.

It is pertinent to note that on April 23, lawmakers during the National Assembly session were divided on a resolution presented by the government on the issue of Namoos-e-Risalat and expelling the French envoy over the publication of blasphemous caricatures in his country.

The minister went on to state that, “Expelling the French ambassador means pulling oneself out of the European Union. Whether it is the TLP or PDM, neither should do anything to take the law in their own hands.”

Regarding the opposition’s protest against the sitting government, Rashid added that they had been doing so for the last three years, adding that the law will take its course if they try to take it into their own hands.

“I’m glad the PDM chose my city [Rawalpindi],” the interior minister said. “If they protest with great enthusiasm and do not take the law into their own hands, there will be no problem. If they spread anarchy, they thy will be digging a grave for themselves.”

He added that Prime Minister Imran Khan was keeping a keen eye on every problem and that the people were wrong to believe otherwise.

“New alliances will emerge as soon as the elections come near,” he said. “The divide between the PML-N is obvious. Even the US is aware of it,” he added.

Earlier, the interior minister alleged that the United States was also aware of the two factions – ‘N’ and ‘S’ – of the Pakistan Muslim League-Nawaz, saying that because of such a reason the US envoy had separate meetings with both the leaders.

Rashid, who is known for his prophecies in political affairs, was referring to the recent meetings of US Charge d’ Affaires to Pakistan Angela Aggeler with PML-N President Shehbaz Sharif and PML-N Vice President Maryam Nawaz.