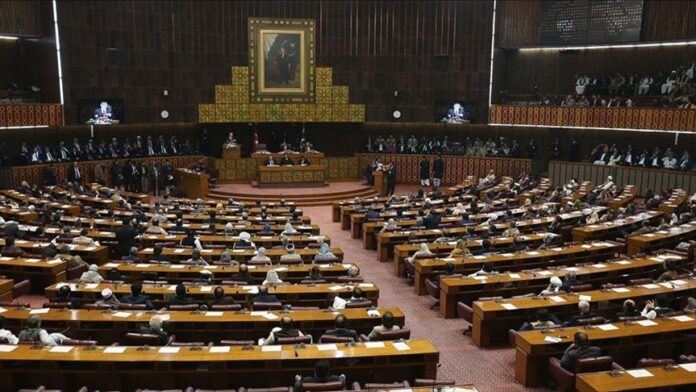 ISLAMABAD: The National Assembly session on Wednesday started off with a discussion on bandits that turned ugly and then saw the deputy speaker exchanging heated words with a PPP MNA.

The situation took another turn when the PTI government came under ‘friendly fire’ of its own lawmaker from Rajanpur, Sardar Riaz Mazari, said the people of his town were fed up with the tyranny of bandits and criticised his own federal and provincial governments for doing nothing against bandits and outlaws.

During the session, PPP member Shazia Marri raised the issue of 10 people being killed by bandits. She added that the residents were so scared that they were reluctant to give their statements to police.

In response, Federal Human Rights Minister Dr Shireen Mazari said Kashmore – where the incident took place — was in Sindh where the provincial police “patronised” bandits.
“When any action has to be taken there, they [police] send the bandits from Sadiqabad to Rajanpur areas of Punjab,” she alleged.

When Rafiullah tried to speak, Suri told him to remain seated. The deputy speaker told Rafiullah that he was a member and had a status of his own. “Why are you resorting to being a lackey?”

Rafiullah retorted by saying that you people were also lackeys of “Peerni”, a reference to PM Imran Khan’s wife Bushra Bibi.

When PPP lawmakers, especially Agha Rafiullah, protested against this, Deputy Speaker Qasim Suri told them to calm down.

PTI member Sardar Riaz Mazari, fed up with the tyranny of bandits, erupted against his own federal and provincial governments. “Bandits are ruling from Rajanpur to Kashmore. Our people don’t ask for streets or complain about dirty sewage pipes. They just want peace.”

The PTI lawmaker said with the exception of army chief Gen Qamar Javed Bajwa, he had raised the issue with the prime minister, chief minister and ISI chief, but nothing has happened.

“It is sometimes said that the BLA [Balochistan Liberation Army] are doing it. Whoever is doing it, it’s still our government who is responsible to stop it.”

State Minister for Parliamentary Affairs Ali Muhammad Khan said interfering in domestic affairs would not be tolerated at all.

“This is not the PPP’s style of politics. Maybe it had been affected by the PML-N,” he added. The state minister recalled that former premier Benazir Bhutto had expelled a member from the PPP for making obscene remarks against a woman.

“A woman [Bushra Bibi], who has nothing to do with politics, should not be dragged into this.”

Junaid asked that when the parliament had decided to give 3% of the National Finance Commission (NFC) award to the tribal districts and not to tax the region as well as provincially administered tribal areas (PATA) for five years, why it was not being implemented.