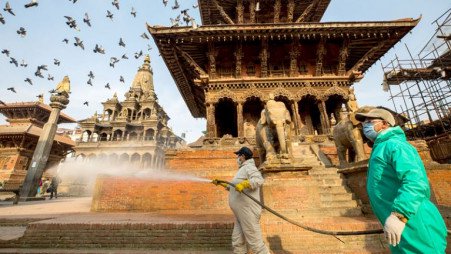 Can anyone imagine a Muslim country building a Buddhist monastery in Nepal, a religiously Hindu country? Recently it established a clear-cut example amongst all countries in the world that Bangladesh is the role model of communal harmony in the world. The Bangladesh government has the interest and intention of holding Bangladesh as a non-communal Bangladesh. But some barbaric culprits and stupid criminals are trying to damage the national prestige of Bangladesh in the international arena by committing heinous misdeeds.

It is Bangladesh which can be considered a champion and role model of communal harmony in the whole world. People have been living here with lasting intercommunal peace and confidence. Bangladesh’s Inter-communal harmony is well known to and praised by the world.

The people of Bangladesh believe in the policy “Religion is everyone’s festival; everyone has equal respect for all religions.” Now a question arises. But why? Because uncivilized, barbaric perpetrators and propagandists don’t want it to be implemented. People who have anti-Bangladeshi sentiment in their mindset always seek the time and place to oppose this. They waited for the golden time for committing this and have tried to take advantage of this opportunity. Recent events surrounding the Durga Puja celebration in Bangladesh proved it again.

But what’s going on in Bangladesh now? Some miscreants spread rumours through using social media to destabilize the peace and stability of communal harmony in Bangladesh. The people of Bangladesh have been enjoying the God-given blessings in the case of inter-communal ties. But miscreants who don’t want the development of the country might be behind this.

Bangladesh as a secular country always tries to ensure the rights of all ethnic and religious groups. Bengali culture is synonymous with inter-communal harmonies. It is one of the countries in the world where Muslims, Hindus, Christians, Buddhists, and various ethnic tribes have been living together with eternal peace.

But recent incidents regarding vandalism of Durga idols in Bangladesh created tensions. It was an incident. The people who allegedly committed the crime must be brought to justice. No one has the right to bother or disturb anyone.

Bangladesh is a responsible country in the world. It is known to shelter the human beings (Rohingyas from Myanmar) and take back its own people to its own land (Chakma people in 1994). Bangladesh wants to ensure perpetual regional peace in the region (on the lines of the 1997 Chittagong Hill Tracts Peace Accord)

However, in Comilla, those who have insulted the Qur’an, attacked and vandalized the puja mandapa, don’t symbolize the mindset of the whole Bangladeshi people. Basically, that was mockery, misconception, terrorism in the name of serving one’s own religion. It is true that each and every religion in the world teaches us tolerance towards others, nonviolence and to be respectful to others. Every and each human being is safe under the shelter of the umbrella of God. Recent Comilla, Chandpur, Chittagong and Rangpur incidents in Bangladesh are not representative of Bangladesh. Bangladesh has more districts and regions. But the incidents in the above-mentioned places are pathetic.

People should be seen as human beings, not religious identities. Bangladesh is a country of communal harmony. Those who want to destroy this harmony must be under tribunal. The Prime Minister has already assured this. Her prompt reaction was seen during her meeting Hindu community.