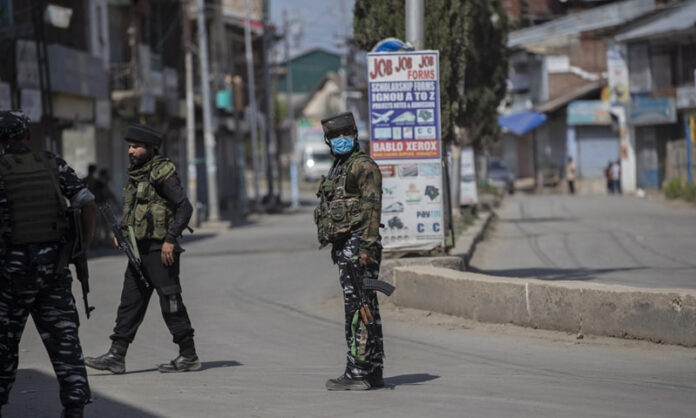 A year has gone by but the Indian Army has not yet punished Captain Bhoopender Singh and his aides who killed three Kashmiri porters in Shopian (Rajori district) on18 July 2020. Those killed by the army captain at Amshipora were 25-year-old Mohammed Ibrar of Tarkasi village, 20-year-old Imtiyaz Ahmad of Dharsakri village, and teenager Mohammad Ibrar, also from Dharsakri.

The Captain tried his best to destroy all traces of the stage-managed evidence. But, the DNA tests exposed his crime. In his report filed with his adjutant, the Captain claimed to have killed three “unidentified hardcore terrorists” in a gunfight in Amshipora village of Kashmir’s Shopian district.

The captain dumped their bodies in a nameless grave near the border. But, public outcry compelled the army to exhume the dead bodies and match their DNA samples with family members’. The Armed Forces Special Powers Act barred the police from taking cognisance of the case. However, mounting protests forced the Army to allow the investigation.

The police investigation concluded that the three victims were ordinary labourers and had no links with militancy. The chargesheet identified three men as the accused including Captain Bhoopendra Singh alias Major Basheer Khan of 62 Rashtriya Rifles.

Upon investigation, it was proved that weapons and arms were planted on their bodies to portray them as Pakistani militants. The Captain and his aides were however never arrested.

A 200-page chargesheet was filed in the court which skewed important aspects of circumstantial evidence so as to let the accused persons go scot-free.

In October, Jammu and Kashmir Lieutenant Governor Manoj Sinha visited the three families and assured them that justice would be done. The chargesheet was an eyewash.  The aggrieved family was kept in the dark about the court proceedings, still lingering. Haji Mohammad Yousuf, the father of Mohammed Ibrar, one of the three young workers killed in the Amshipora encounter, lamented, “I don’t even know the government lawyer who is fighting my case.You won’t believe it but I am not even aware of the dates when our case was taken up.”

The police statement claimed the army personnel led the 62 Rashtriya Rifles, which is a counter-insurgency force of the Indian Army, reported to them that before they could be joined by their counterparts from the Jammu and Kashmir police and the Central Reserve Police Force, they came under gunfire from militants. As they retaliated, three militants were killed on 18 July 2020.

If the investigation is not able to show the evidence about the prime motivation behind the conspiracy, the case will collapse. No additional evidence has been produced by the police after the filing of the chargesheet. There is no money trail, nor is there any additional information about the source of illegal weapons planted on the slain.

The bodies of the three men were taken to Baramulla district, 125 km away, where they were re-buried after medico-legal formalities including collection of their DNA.

A case with  FIR No. 42/2020 was registered by the Shopian police detailing the army’s version of the gunfight. No photographs were released by the police at the time, nor were the three slain men identified.

There were two other accused, both civilians: Tabish Nazir Malik of Chowgam village in Shopian, and Bilal Ahmad Lone of Arabal Nikas village in Pulwama district. Both were detained by police on September 28, but let go with a slap on the wrist. Lone turned an approver in the case.

According to the army’s report to the police, two pistols with two magazines, four empty pistol cartridges, and 15 live cartridges and 15 empty cartridges of the AK Series weapon and “other objectionable items were recovered from the encounter site”.

Major Kush, the adjutant whose written report to the police became the basis for the registration of a case on the day of the encounter, has not been interrogated. Major Kush, the adjutant of the 62 Rashtriya Rifles, with its headquarters in Kathuhallen, Shopian, provided information to the police. After receiving a written report about the encounter from the army, Shopian police filed a First Information Report at Heerpora police station. But the adjutant’s role was not investigated. Similarly,  Major Amit Kumar Rai, who was part of the operation, remained inaccessible.

The prime motivation behind the killing of the three innocent civilians in a fake encounter, according to the police investigation, was “prize money” of Rs 20 lakhs.

But the police investigation was unable to recover this money or establish any financial trail. The charge sheet said that none of the three accused revealed “anything fruitful regarding the prize money of Rs 20 lakhs”.

This is one of the biggest lacunae in the police investigation. If the investigation is not able to show the evidence about the prime motivation behind the conspiracy, the case will collapse.

No additional evidence has been produced by the police after the filing of the chargesheet. There is no money trail, nor is there any additional information about the source of illegal weapons planted on the slain.

Establishing the sequence of events leading up to the fake encounter in Amshipora, the police chargesheet said that Captain Singh along with Malik and Lone drove out from the army camp in Reshinagri on July 17 in a private car bearing registration number DL8CU 0649. They drove to Chowgam village where they abducted the three workers from their rented accommodation, took them to Amshipora, where they were gunned down.

According to the police chargesheet, the private car, which had been arranged by Captain Singh, belonged to a civilian named Aijaz Ahmad Lone of Reshinagri village. In his statement, Lone deposed that “some soldiers” from the army camp came to his home on17 July 2020 and asked for his car. He handed over the keys of his car to the soldiers. They told him that they would call him the next day after which he could collect his car from the camp. “Subsequently, the other day on 18.07.2020 army had informed him that the said vehicle A-star bearing registration No. DL8CU 0649 was lying at Amshipora in faulty condition…” the chargesheet noted. Lone went to the spot and towed his car home with the help of another vehicle.

The police investigation did not establish the identity of the soldiers who had asked Lone to hand over his car to them.

Wajahat Hussain, the investigating officer in the case at the time the chargesheet was filed, has been transferred since.

As the case shows, getting justice in Kashmir is well-nigh impossible.