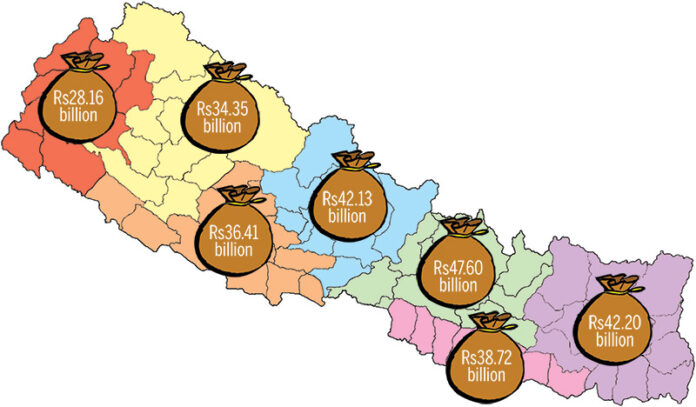 All the four provinces forming the Federation of Pakistan, Punjab, Sindh, Khyber Pukhtoonkhwa and Balochistan, got less than their projected share out of the Divisible Pool of Taxes and Duties under the 7th National Finance Commission (NFC) Award, which continues to be in force even after 11 years against its stipulated life of 5 years, in varying figures during 2020-21.

According to the latest facts and figures now available from official sources, the hare of the provinces in the Divisible Taxes and Duties and Straight Transfers was projected to be Rs 2923718.740  million  during financial year 2020-21.Against this, the revised figures of provinces share for the last financial year was Rs 2704163.854 million as detailed below:

These are  projected  figures and what the provinces will actually be getting as their share will only be known around June 2022 when the federal budget for financial year 2022-23 is announced. Higher and lower share of the provinces depends mainly on the good or bad performance of the federal government’s main tax collection agency, the Federal Bureau of Revenue (FBR), to say the least.

The incumbent federal government also appointed 10th NFC in May 2020 which is continuing its deliberations, rather at a pretty slow pace and is expected it may come up with the finalized recommendations letting the President  notify the 10th NFC Award well in time ahead of the next federal  budget around June 2022

The share of the Federal Government in the net proceeds of the divisible pool is 42.5 percent  and of the provinces  57.5 percent  from the financial year 2011-12 onward, as per the 7th NFC Award.

The divisible pool of taxes , levied and collected by the federal government,  include taxes on income; wealth tax; capital value tax; taxes on sales and purchases of goods imported, exported, produced, manufactured or consumed; export duties on cotton; customs duties; federal excise duties excluding  the excise duty on gas charged at well-head; and any other tax which may be levied by the Federal Government.

Allocation of shares to the provinces are based on multiple indicators. The indicators and their respective weights are Population 82.0 percent; Poverty  or backwardness 10.3  percent; Revenue Collection or Generation 6.0  percent and  Inverse Population Density   2.7  percent.

Sum assignment to the Provincial Governments is distributed amongst the provinces on the basis of the percentage  as specified against each: Punjab 51.74  percent; Sindh  24.55  percent; Khyber Pukhtoonkhwa 14.62  percent, and Balochistan  9.09  percent.

Additionally, the provinces also receive payments of net proceeds of royalty on crude oil and development surcharge on natural gas.

Prior to going onwards, it is appropriate to briefly mention as to when the 7th NFC Award had come into force and how it still continues to be  in force.

The provincial share of revenues from the divisible pool of taxes, straight transfers and so on is governed in accordance with the provisions of the 7th NFC Award notified through President Asif Ali Zardari’s Order to provide for distribution of revenues and certain grants  issued on 10 May 2010 called “The Distribution of Revenues and Grants-in-Aid Order 2010”  and it came into force from 1 July 2010. As no new NFC Award had  surfaced   within the stipulated period of five years, President Mamnoon Hussain  amended the Order which came into force with effect from  1 July 2015.

The amending Order called the Distribution of Revenues and Grants-in-Aid Order (Amendment) Order 2015   provided that it was to remain in force till further orders. Accordingly, the 7th NFC Award continues to be automatically extended every year thus saving President Dr Arif Alvi from issuing an order extending it every year.

Over the years, 8th and 9th NFCs were appointed one after the after but both failed to accomplish the assigned tasks within the given time. The incumbent federal government also appointed 10th NFC in May 2020 which is continuing its deliberations, rather at a pretty slow pace and is expected it may come up with the finalized recommendations letting the President  notify the 10th NFC Award well in time ahead of the next federal  budget around June 2022.

For the information of all those interested and concerned, it is briefly mentioned here that financial relations between the Federation and the Provinces are governmet  by Part V1 of the Constitution  of the Islamic Republic of Pakistan  headed Finance, Property, Contracts and Suits  and Chapter 1 Finance relates to Distribution of Revenues between the Federation and the  Provinces  through Articles 160 to 174.

Article 160 (1) inter alia reads “ Within six months of the commencing day and thereafter  at intervals not exceeding  five years, the President shall constitute a National Finance Commission consisting of the Minister of Finance of the Federal Government , the Ministers of Finance of the Provincial Governments , and such other persons  as may be appointed by the President  after consultation with the Governors of the Provinces”.

Each of the four provincial governments as such nominates its technical member to the NFC while the Federal Finance Secretary acts as the official expert to the Commission.