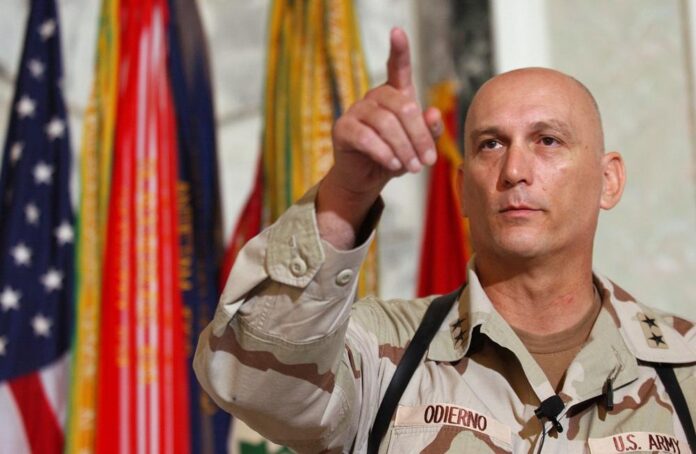 WASHINGTON: Raymond T. Odierno, a retired army general who commanded American and coalition forces in Iraq at the height of the war and capped a 39-year career by serving as the Army’s chief of staff, has died, his family said Saturday. He was 67.

“The general died after a brave battle with cancer; his death was not related to COVID,” a family statement said. “There are no other details to share at this time. His family is grateful for the concern and asks for privacy.”

Odierno died Friday; the family declined to say where. It said funeral and interment information was not yet available.

President Joe Biden lauded Odierno as a “hero of great integrity and honor.” In a joint statement, the president and First Lady Jill Biden recalled that Odierno spoke at the funeral of their son Beau, who served under Odierno in Iraq and died of brain cancer in 2015.

“Ray was a giant in military circles — dedicated first and always to the service members he commanded and served alongside,” the Bidens said, adding that Odierno and his wife Linda were advocates for military children and families.

“We stand with the Odierno family and all our brave service members who were shaped and molded by General Odierno over his lifetime of service,” they said.

At 6-foot-5, Odierno was an imposing figure. He played football as a cadet at West Point and retained a lifelong interest in the sport. Army Secretary Christine Wormuth wrote on Twitter Saturday evening that Odierno embodied the values of West Point and of the Army itself.

“A leader who was larger than life, we will remember him always for his selfless service to our nation and to our soldiers in and out of uniform,” she wrote.

Defense Secretary Lloyd Austin, who succeeded Odierno as the top overall commander in Iraq in 2010, called him a confidant, a friend and a powerful example.

“Ray was known for his loyalty — to the mission and to his people,” Austin said in a statement. “He cared deeply about the troops who knew him as ‘General O,’ and he and Linda looked after the families of those troops as if they were their own.”

Odierno served three tours in Iraq. After his first, in 2003-04 as commander of the 4th Infantry Division, he was criticized by some for overly aggressive tactics that some believed fed an insurgency. At an early high water mark, in December 2003, his soldiers involved in the capture of Iraq’s deposed president, Saddam Hussein. That success gave hope to quashing an emerging insurgency, but in 2004 the insurgency gained greater momentum and led to the deadly rise of al-Qaida in Iraq.

Odierno returned to Iraq in 2006 and served for two years as commander of Multi-National Corps-Iraq. In 2008 he took over as the top overall American and coalition commander in Baghdad, leaving in 2010 as combat was winding down and as President Barack Obama was adding troops in Afghanistan.

A native of Rockaway, New Jersey, Odierno graduated from the US Military Academy at West Point, New York, in 1976 with a commission in field artillery. He served in a wide range of Army and Defense Department roles with multiple tours abroad, including in Iraq, Germany, Albania and Kuwait. As a three-star general, he was assistant to the chairman of the Joint Chiefs of Staff, a job that made him the main military adviser to the secretary of state.

When Odierno retired in 2015, he was succeeded as Army chief of staff by Gen. Mark Milley, the current Joint Chiefs chairman. In a statement Saturday, Milley said Odierno’s legacy will “live on through the generations he led.”

At a ceremony marking his retirement from the Army in 2015, then-Defense Secretary Ashton Carter described him as a commander whose tenacity and operational savvy gave civilian leaders great confidence.

“His commanding presence calmed the confused, and his courage and compassion helped carry the burden of loss and sacrifice,” Carter said.

WASHINGTON: An Iraqi man who came to the United States two years ago and applied for asylum hatched a plot to assassinate former President...
Read more
World

HOUSTON: An 18-year-old gunman killed 14 children and a teacher at an elementary school in Texas on Tuesday, according to the state's governor, in...
Read more
World

Taliban to sign pact with UAE on running Afghan airports

The Taliban will sign an agreement with the United Arab Emirates on operating airports in Afghanistan, the group's acting deputy prime minister said on...
Read more
World

BEIJING: Chinese State Councilor and Foreign Minister Wang Yi is to start his trip to the South Pacific region and East Timor, with the...
Read more
World

JERUSALEM: Following the killing of Al Jazeera reporter Shireen Abu Akleh during a raid in the occupied West Bank, AFP has looked at the...
Read more
- Advertisment -