Only consensus will let EVMs be useful 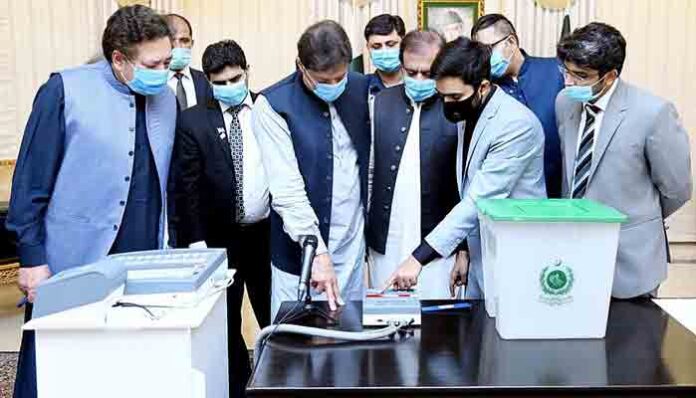 Tensions are running high between the government and the Election Commission of Pakistan over the issue of electronic voting machines. Federal ministers have lashed out at the ECP, calling it a mouthpiece of the opposition. If the objections to electronic voting had been put in front of the public by a team of experts, it would have been possible to know what are the advantages and disadvantages of it technically, and to what extent it is a reliable system, but everyone is speaking their own language, so that it is difficult to determine whose position is right and whose wrong. As far as a disagreement between the opposition and the government is concerned, they have rarely been able to resolve issues by consensus, except in cases where national institutions intervene and consult. If electronic voting is also treated as a technical issue instead of a political issue, then this issue can be resolved, otherwise this issue will remain tangled and no solution will be able to come to the fore.

There is no doubt that holding free and fair elections in the country is the desire of all and like other issues, there is no problem with the use of technology, but to create a more conducive atmosphere, it would be good to take a closer look at the reservations that are certainly not impossible to resolve. The ECP has raised 37 objections to the electronic voting machine. The Ministry of Science and Technology has responded to all the objections of the ECP and as the Federal Minister for Science and Technology has said that further explanations and recommendations will be offered by the Ministry at the meeting of the Technical Committee of the ECP. This seems like a reasonable position to take, and it is possible that the briefing of the experts of the Ministry of Science would have persuaded the experts of the Election Commission to consult their opinion, but the controversial statement of the Federal Minister for Railways has ruled out all possibilities.

These issues are moving towards new controversies instead of reforming the situation. That in order to exercise the people’s right to vote in a transparent and full manner, the government, the opposition and the Election Commission should find a way of achieving consensus instead of indulging in disagreement for dissent, which would also remove objections and ensure transparent elections through modern technology. This task is certainly difficult, but not impossible

It is not surprising that there is a difference of opinion between the government and the opposition, but this difference of opinion is considered the beauty of democracy. However, it is wrong for government ministers to accuse the ECPof being the voice of the opposition. This could lead to escalating political tensions and institutional clashes. The ECP is also an independent body established under the Constitution. The appointment of its Chairman and members is carried out after consultation between the Prime Minister and the Leader of the Opposition in the light of the 18th Amendment. The ECP has to prevent the possibility of any kind of fraud in the electoral process across the country. If the government itself expresses distrust in the ECP and various allegations are leveled, it will make it difficult for the ECP to discharge its responsibilities freely.

The opposition is trying to take full advantage of the clash between the government and the ECP. However, the strength of the opposition parties is evident from their movements so far. It has not been able to raise a strong voice on the basic issues of the people, but despite all the differences to protect its interests, it seems united and determined to block the path of the electronic voting machines. Seeing the rhetoric of the government and opposition parties, it does not look as if there may be a consensus on electoral reforms in the coming days, so the political temperature seems to be getting higher.

Electronic voting machines can play a key role in keeping the voting process transparent, as the Prime Minister himself has tested the machine, wherever the Prime Minister wants the elections to be transparent through modern technology. Members of parliament were also invited to check the performance. The government is responding satisfactorily to the objections raised by the opposition and the ECP after seeing the performance of the electronic voting machine and is also promising to allay concerns, but the allegations leveled by the government ministers against the ECP on this occasion prove that the issue is being deliberately made controversial.

These issues are moving towards new controversies instead of reforming the situation. That in order to exercise the people’s right to vote in a transparent and full manner, the government, the opposition and the Election Commission should find a way of achieving consensus instead of indulging in disagreement for dissent, which would also remove objections and ensure transparent elections through modern technology. This task is certainly difficult, but not impossible.