Potential alliance of five countries versus the Quad group

There is an alliance developing, but it faces problems 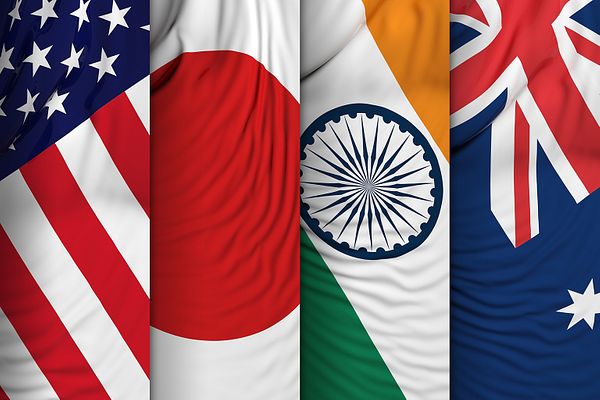 Quadrilateral Security Dialogue is known as the Quad (A Strategic Dialogue between the USA, Australia, Japan and India). The dialogue was arranged by Japan with the support of the USA in 2007 and was paralleled by a joint military exercise of an exceptional scale.

These military and diplomatic arrangements were viewed as the response to growing Chinese economic and military power. That’s why Beijing protested to the Quadrilateral Dialogue member states. In 2017, the member states revived the quadrilateral agreement and agreed to counter China diplomatically and militarily in the South China Sea. It seemed to be the beginning of a new cold war.

In 2021, a joint declaration, “A shared vision for a Free and open Indo Pacific and a  Rule based maritime order in the east and South China Sea,” was issued, which member states wanted to counter Chinese maritime claims. So, China has been reacting negatively towards QUAD.

As the QUAD continued cementing its role in Indo Pacific and beyond, there have been discussions to counter the QUAD groups arrangements. Iranian envoy to Pakistan last year had proposed a potential China, Russia, Pakistan, Iran and Turkey regional security arrangements (Penta). Such arrangements are very much supportive to China because it is building physical presence and creating dependency in the region through its Belt and Road Initiative and notably the port of Gwadar. Since the CPEC project has started, China-Pakistan regional security concerns have also been growing. It is also speculated that China, Russia, Pakistan, Iran and Turkey are thinking of a bloc. Such groupings may also be aimed to counter the growing influence of the Quad. However, the Penta, a group of five countries, can be highly impractical due to many reasons.

In fact, the arrangement between China, Russia, Pakistan, Iran and Turkey (Penta) has only been proposed so that it may counter the arrangement and influence of Quad in the region.But according to analysts and experts,the possible arrangement of five countries has raised many question marks as the countries do not share the same values and interests. They have their diverse grievances and strategic interests. The arrangement may be complicated due to mistrust among them.

China and Russia have been opposed to Quad Group management and the two countries have often cooperated to establish a balance against the Quad, particularly US ambitions. In response to this year’s Quad Group conference, China has sharply criticized it. On the other hand, Russia also has made similar comments that Western countries are trying to “suppress China and Russia” by promoting the “Indo-Pacific Strategy” and the Quad Group, which is questionable. Furthermore, during the clash with Ukraine in 2014, heavy sanctions by the West on Russia have led Moscow to embrace Beijing to deal with its economic challenges. However, it does not seem possible to achieve the possible results because Beijing and Moscow have also a lot of fears of, and anxieties about, each other and also there is a lack of trust in each other.

The reality of this situation is that a possible five-nation alliance and regional arrangement cannot go much further in presenting itself as a strong counter-group against the Quad. Many issues of mistrust and narrow-mindedness stand in the way of the proposed five-nation alliance forming a strong and united group

Iran’s relations with the USA have been worsening since 1979 and Iran faced the negative effects of sanctions imposed by the Washington administration. But in the midst of such a tumultuous situation, China has violated US sanctions by importing oil from Iran and positioning itself as a key partner of Iran. In addition, in March 2021, the two countries have agreed on a major strategic agreement worth $400 billion to purchase Iranian oil, increase investment and deepen military cooperation. Along with China, Russia has also clarified its position as a key security partner of Iran۔

Despite being a member of the North Atlantic Treaty Organization (NATO), Turkey’s dissatisfaction with the USA continues to grow. Last year, Turkey imported 400 missiles from Russia to challenge the Trump administration’s decision of imposing sanctions. In addition, Turkey’s support for Pakistan in internationalizing the Kashmir issue and Turkey’s interference in India’s internal affairs in favor of Pakistan, has forced India to side with the Quad group.

On the other hand, Pakistan always supports any organization or group that opposes or challenges Indian influence. According to former Indian Ambassador Vishnu Prakash, “Islamabad is ready to jump on any bandwagon against New Delhi or to do anything that is damaging to Indian interests from afar”.

China has been a key pillar in Pakistan’s efforts to strike a balance against India. Furthermore, Pakistan continues to support Turkey’s ambitions to assume a leading role in the Islamic world, as Turkey is Pakistan’s strongest supporter on Kashmir. Furthermore, Pakistan has been trying to strengthen its strategic relationship with both Russia and Iran and has been taking advantage of the warmth in India-US relations. No, it is not in Pakistan’s interest to leave a strong and balanced alliance against the Quad Group. Despite some common strategic goals that bring these five countries together at one point, these five countries do not share some of the values and principles that can strengthen such an arrangement. Because these values and differences are dictatorial and religious in nature, there is no room for flexibility in these countries in the long run. Furthermore, there is a constant dilemma of suspicion against each other in every country.

China and Russia can be important strategic partners in pursuing certain strategic goals. However, a closer look reveals that Beijing’s engagement with Moscow is significantly selective and based on its own interests. China has refused to back Moscow over Crimea and Ukraine.

On that occasion, it did not even express a desire to support Russia. In addition, China is expanding its strategic influence in Central Asia. Through arms sales, training programmes and new military outposts, China is pushing for entry into the former Soviet republics, which could significantly weaken Russia’s influence and interests in Central Asia in the years to come.

On the other hand, although economic relations between Turkey and Iran are improving, the same cannot be said for the scope of strategic interests, as Turkey and Iran are mostly concerned with regional geopolitical issues such as the Syrian conflict,  and the situation in Iraq and Israel. There have been opposing sides in the relationship. Furthermore, Turkey’s reduction in Iranian oil purchases is a mixed indication of the viability of its bilateral relations.

Turkey’s relations with Russia are not ideal either. Despite efforts by both sides to improve relations, there are signs of mistrust between the two countries. As Turkey seeks to increase its influence in the South Caucasus and Central Asia, active military assistance from Ukraine continues to weaken Turkish-Russian relations.

On the other hand, Pakistan also faces many obstacles in bridging the gap with Iran. Due to its heavy reliance on Saudi Arabia and the United Arab Emirates, it is difficult for Pakistan to maximize its partnership with Iran on various issues. In addition, China’s relations with Turkey are embroiled in conflict, especially over its treatment of the Uighurs.

The reality of this situation is that a possible five-nation alliance and regional arrangement cannot go much further in presenting itself as a strong counter-group against the Quad. Many issues of mistrust and narrow-mindedness stand in the way of the proposed five-nation alliance forming a strong and united group. A possible alliance of five countries, which is an effort towards achieving strategic goals as the Quad, focuses on overall stability, transparent development and discipline among all countries in the region.

This arrangement of five countries can get caught up in each other’s intentions, as a result of which no country can achieve significant positive benefits or compromise on its goals. That would be disastrous for regional peace and its overall balance۔

As a result of rhe general election held in Pakistan for 342 members of the National Assembly   on 25 July 2018, the present...
Read more
Comment

Pakistan was ranked 92nd out of 116 nations in the Global Hunger Index (GHI) in the year 2021. The country has a level of...
Read more
Comment

Why do Kashmiris observe October 27 as the darkest day?

Kashmiris in Indian occupied Jammu and Kashmir, Pakistan and around the world are yet again observing October 27 as the darkest day of their history...
Read more
Editorials

The Tehrik Labbaik Pakistan (TLP) is once more on the streets, protesting not against some fresh blasphemy against the Holy Prophet (Peace Be Upon...
Read more
Editorials

While the negotiations with the International Monetary Fund are not over, the departure of PM’s Finance Adviser Shaukat Tarin, not just from the talks,...
Read more
Comment

AT PENPOINT The inordinate delay in the issuing of the notification of the new DG ISI has meant many things, but one of the most...
Read more