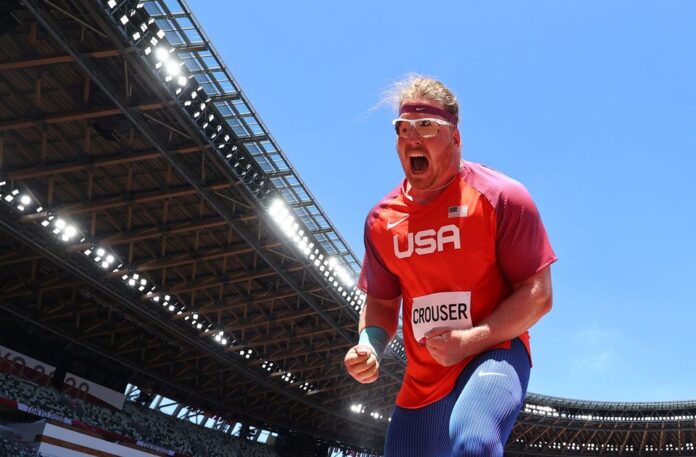 TOKYO: US men continued to splutter on the athletics track at the Tokyo Olympics on Thursday, while kayaker Lisa Carrington became New Zealand’s most decorated Olympian and American Ryan Crouser broke his own shot put world record three times.

Jamaica’s Hansle Parchment stunned viewers and himself with an upset win over the overwhelming favourite, Grant Holloway from the United States, in the 110 metres hurdles. The Americans individually remain bereft of a running gold – a prize they have won every time they have entered since the inaugural 1896 Games.

A bedraggled US 4×100 metres performance added to the American woes.

Elsewhere in the Games, which end on Sunday, skateboarders soared in the Tokyo heat, open-water swimmers had to navigate elbows as well as fish, and a Japanese mayor grossed out the nation and prompted a rebuke from automaker Toyota for biting a softball player’s gold medal.

US men, who once dominated the 4x100m, failed to qualify for the final despite having two individual 100m finalists on the team. A ragged run, with poor changeovers and a shocking second handover, dragged them to a desultory sixth in their semi-final.

Carl Lewis, the superstar sprinter of the 1980s and ’90s, called his compatriots’ performance “a total embarrassment, and completely unacceptable”.

China were the surprise heat winners, while Jamaica took the other semi.

In the 110m hurdles, world champion Holloway looked set to win until Parchment surged past him to add a gold medal to his London Olympic bronze in one of the biggest athletics shocks of the Games.

‘THOUGHT MY EYE HAD FALLEN OUT’:

Crouser, wearing shades and a hat with the US flag on it, broke his own record in the shot put three times – only the third time that has happened – to grab gold with a mark of 23.30 metres.

He donned a cowboy hat afterwards and celebrated with his countryman and silver medallist Joe Kovacs, draped in the Stars and Stripes. Crouser, from a family of throwers, held up a card reading: “Grandpa, we did it, 2020 Olympic champion”.

At the Sea Forest Waterway in Tokyo Bay, Carrington’s gold in the women’s kayak single 500m brought her overall medals haul at the Olympics to six, including a bronze in 2016.

“It’s something I never thought I’d be able to do,” she said. “It’s amazing.”

At nearby Odaiba Marine Park, however, the waters were more turbulent. Marathon swimmer Hector Thomas Cheal Pardoe of Britain got elbowed in the eye on the last lap, sustaining a cut and losing his goggles.

“I couldn’t see anything, I thought my eye had fallen out in the water,” he said in an interview after leaving the race. “I was going up to the lifeguard saying, ‘My eye! My eye! Is it OK?’.”

Dutch rider Shanne Braspennincx came back six years after a heart attack to snatch a surprise gold medal in the women’s keirin.

“A heart attack isn’t like something you have when you are an athlete,” said Braspennincx, 30, who required surgery to widen an artery that had become totally blocked and also had a stent fitted.

Japan’s punishing summer continued, offering no respite to race walkers whose event was shifted to Sapporo in the north to beat the heat.

Men in the 20km race walk poured water over their steaming bodies and also gulped it down as temperatures hit 33 degrees Celsius (91 Fahrenheit).

“We came up here because we thought it would be cool. It’s not – it’s not much cooler than Tokyo,” said American Tricia Adkins who came to the northern capital Sapporo to watch the race.

Just a degree cooler in Tokyo, skateboarding continued to wow at its maiden Games, with skaters sweatingthrough their final runs, before taking selfies.

Australian Keegan Palmer glided to gold at Ariake Urban Sports Park in what looked an effortlessly smooth ride packed with tricks in the men’s park event. Brazil’s Pedro Barros took silver for his lightning fast run through the concrete bowl.

Less hip, Nagoya Mayor Takashi Kawamura suffered an online backlash for having feted softball pitcher Miu Goto the day before by pulling down his mask and putting her gold medal between his teeth.

It did not help that he was standing in front of a backdrop urging people to take proper Covid-19 precautions in a country looking to expand pandemic states of emergency as infections soar.

The hashtag #GermMedal was trending on Japanese social media – the words for germ and gold sound the same in the language.

Hometown giant Toyota Motor Corp called the mayor’s stunt “unfortunate” and “extremely regrettable”, a criticism to which his office did not immediately respond.