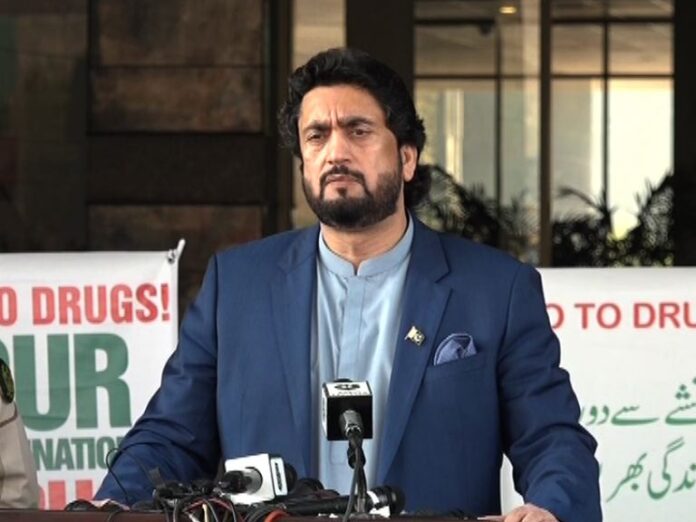 ISLAMABAD: Chairman of the Parliamentary Committee on Kashmir, Shehryar Khan Afridi, on Thursday accused Indian regime of replicating Israel’s ‘settler’ tactics in Kashmir, adding that Modi’s Hindutva government was aiming to bring in demographic changes in Kashmir to turn Muslim-majority region of Jammu and Kashmir into Hindu-majority state.

Addressing a seminar held here jointly by the Human Security Institute and Kashmir Committee on the eve of Youm-e-Istehsaal being observed on August 5, Shehryar Afridi said that issuance of around four million new domiciles to non-Kashmiri Hindus by the illegal occupational regime of Jammu and Kashmir have totally exposed the Indian nefarious designs aimed at turning the Muslim-majority State of Kashmir into a Muslim-minority region.

The conference was attended by diplomats, human rights activists, Kashmiri diaspora, civil society and youth. Major General (r) Samrez Salik welcomed the guests with warm-heartedness and Director-General THSI, Rafique Ahmed Qureshi emphasised how the Indian imposed curfew and outrage in the region is further deteriorating the state of human security. He said that India’s illegal actions have endangered all spheres of human security in Jammu & Kashmir.

Afridi said that the world would never allow Modi’s Hindutva regime to artificially engineer the Muslim-majority Kashmir into a Muslim-minority territory through bringing in demographic changes in Indian Occupied Kashmir (IOK).

The chairman emphasised that in a region, where one out of five Kashmiris has been tortured or detained, cannot be expected to have peace or even the most basic human rights.

“In addition to this, over 100,000 have been killed by the Indian forces since 1989. Furthermore, 7,200 Kashmiri youth have been brutally murdered in illegal Indian custody. 23,000 women have been widowed and 110,000 children orphaned. Over 7,000 mass graves have been discovered in the last two years. If it was not enough, India posted another 200,000 troops in Jammu and Kashmir,” Afridi added.

He said that Modi government revoked articles in the Indian constitution on Aug 5, 2019 that guaranteed Kashmir’s partial autonomy and other rights including its own flag and constitution.

He said that to suppress the Kashmiri reaction, Modi regime sent a huge force to Jammu and Kashmir, adding to 900,000 already there — enforce a siege-like curfew. Thousands were arrested and telecommunications were cut for months.

He said that the IOK state was demoted to a union territory governed directly from New Delhi, while the Ladakh region was carved out into a separate administrative area.

“Creating such new ‘facts on the ground’ in Kashmir which have long been advocated by the Rashtriya Swayamsevak Sangh, India has further sent shudders through India’s 200-million Muslim minority and defenders of its secular traditions, who fear Modi wants to create a Hindu nation — something he denies,” he said.

Afridi also commented that the situation in Kashmir is getting grave day by day and Pakistan must play its pivotal role in sustaining the Kashmiri freedom.

Afridi lauded the services of THSI for raising the issues related to human security and said that the institute under the leadership of Rafique Ahmed Qureshi and hoped that the think-tank would keep working in the right direction.

THSI Director General Rafique Ahmed Qureshi, while addressing the audience, accentuated upon the deteriorated state of human security in IIOK especially since 5th August, 2019. He postulated that among the contemporary global disputes, Kashmir issue is the longest unresolved dispute on UNSC agenda.

He further added that the silence, indecisiveness, and inappropriate response from international community had encouraged India to abrogate the article 370 and 35A.

“As the world has started turning a blind eye to the genocide taking place in the IOK, it is a must for Pakistan and the rest of the regional states to push the world to take action to help save the suffering humanity in Jammu and Kashmir,” he said.

Maj Gen Samrez Salik also commented by adding “The tyranny and injustice can’t prevail forever. Nothing is stronger than the will of human beings. It’s today that honorable PM of Pakistan has said that India has failed to break the will of Kashmiris despite worst kind of oppression.”