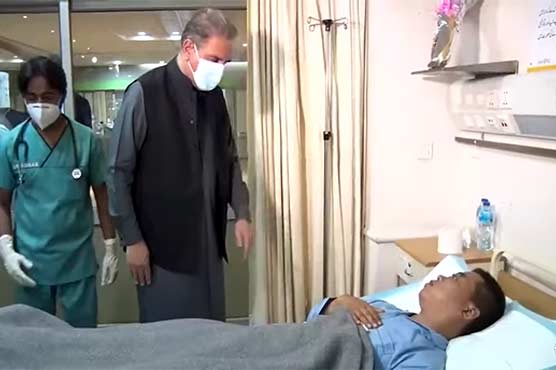 According to the Inter-Services Public Relations (ISPR), during the visit to the hospital, the foreign minister inquired after the injured Chinese nationals and wished them speedy recovery.

Ambassador Nong Rong, speaking on the occasion, said that China and Pakistan will continue to cooperate more closely to face any challenges together.

At least 13 people – nine Chinese nationals and four Pakistanis – were killed and more than two dozen others wounded Wednesday morning when a shuttle bus they were travelling in plunged into a deep ravine after an explosion on board.

The bus was ferrying the Chinese and Pakistani workers to an under-construction tunnel site of the Dasu Hydropower Project in the remote Kohistan district of Khyber Pakhtunkhwa province.

On Saturday, Interior Minister Sheikh Rashid assured Chinese Minister for Public Security Zhao Kezhi that the investigation of the Kohistan bus tragedy was underway at the highest level on the directions of Prime Minister Imran Khan and had entered the final stage.

“The Chinese investigation team is being provided full support,” Rashid said. “All Chinese workers in Pakistan would be provided fool-proof security,” the minister said during a telephone call with the Chinese minister.

The two sides also agreed that no hostile element could spoil the relationship between the two countries.

Earlier, PM Imran also spoke with his Chinese counterpart Li Keqiang and assured him that the government of Pakistani would spare no effort to fully investigate the incident. “He [prime minister] assured that no effort would be spared to fully investigate the incident,” said a statement from the Prime Minister’s Office detailing the telephone call between the two premiers.

Prime Minister Imran Khan Tuesday once again cautioned that Afghanistan could descend into civil war if all factions were not included in an inclusive...
Read more
HEADLINES

ISLAMABAD: Federal Minister for Information and Broadcasting Fawad Chaudhry said on Tuesday that hybrid war and fake news were interlinked and these were fake threats...
Read more
- Advertisment -