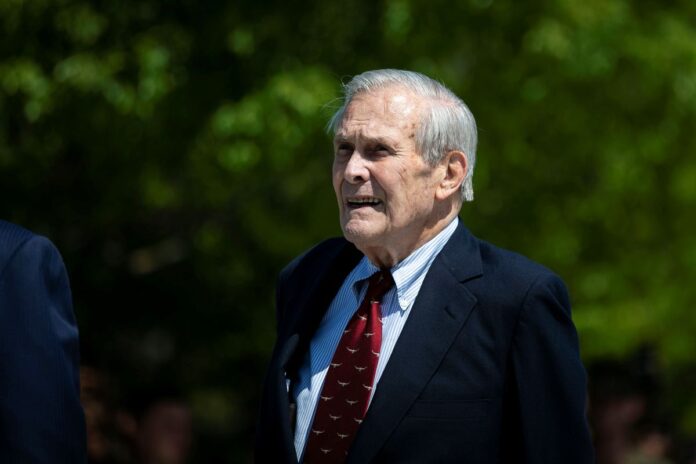 WASHINGTON: Donald Rumsfeld, a forceful US defense secretary who was the main architect of the Iraq war until President George W. Bush replaced him as the United States found itself bogged down after 3-1/2 years of fighting, has died at age 88, his family said in a statement late on Wednesday.

“It is with deep sadness that we share the news of the passing of Donald Rumsfeld, an American statesman and devoted husband, father, grandfather and great grandfather,” the statement said. “At 88, he was surrounded by family in his beloved Taos, New Mexico.”

The statement did not say when Rumsfeld died.

Rumsfeld, who ranks with Vietnam War-era defense secretary Robert McNamara as the most powerful man to hold the post, brought charisma and bombast to the Pentagon job, projecting the Bush administration’s muscular approach to world affairs.

With Rumsfeld in charge, US forces swiftly toppled Iraqi President Saddam Hussein but failed to maintain law and order in the aftermath, and Iraq descended into chaos with a bloody insurgency and violence between Sunni and Shi’ite Muslims.

US troops remained in Iraq until 2011, long after he left his post.

Rumsfeld played a leading role ahead of the war in making the case to the world for the March 2003 invasion. He warned of the dangers of Iraqi weapons of mass destruction but no such weapons were ever discovered.

Only McNamara served as defense secretary for longer than Rumsfeld, who had two stints – from 1975 to 1977 under President Gerald Ford, for whom he also served as White House chief of staff, and from 2001 to 2006 under Bush.

Rumsfeld was known for imperious treatment of some military officers and members of Congress and infighting with other members of the Bush team, including Secretary of State Colin Powell. He also alienated US allies in Europe.

In 2004, Bush twice refused to accept Rumsfeld’s offer to resign after photos surfaced of US personnel abusing prisoners at the Abu Ghraib prison outside Baghdad. The scandal triggered international condemnation of the United States.

The United States faced global condemnation after the photos showed US troops smiling, laughing and giving thumbs up as prisoners were forced into sexually abusive and humiliating positions including a naked human pyramid and simulated sex. One photo showed a prisoner forced to stand on a small box, his head covered in a black hood, with wires attached to his body.

Rumsfeld personally authorized harsh interrogation techniques for detainees. The US treatment of detainees in Iraq and foreign terrorism suspects at a special prison set up under Rumsfeld at the US naval base at Guantanamo Bay, Cuba, drew international condemnation, with human rights activists and others saying prisoners were tortured.

He was a close ally of Bush’s vice president, Dick Cheney, who had worked for Rumsfeld during the 1970s Republican presidencies of Richard Nixon and Ford.

Rumsfeld became a lightning rod for criticism and, with the Iraq war largely a stalemate and public support eroding, Bush replaced him in November 2006 over Cheney’s objections.

Days after vowing Rumsfeld would remain for the rest of his term, Bush announced his departure a day after mid-term elections in which Democrats took control of Congress from Bush’s Republicans amid voter anger over the Iraq War.

Robert Gates, a soft-spoken but demanding former CIA director, took over from Rumsfeld in December 2006 and made sweeping strategic and military leadership changes in Iraq.

Many historians and military experts blamed Rumsfeld for decisions that led to difficulties in Iraq. For example, Rumsfeld insisted on a relatively small invasion force, rejecting the views of many generals. The force then was insufficient to stabilise Iraq when Saddam fell.

Rumsfeld also was accused of being slow to recognize the emergence of the insurgency in 2003 and the threat it posed.

The US occupation leader under Rumsfeld, L. Paul Bremer, quickly made two fateful decisions. One dissolved the Iraqi military, putting thousands of armed men on the streets rather than harnessing Iraqi soldiers as a reconstruction force as originally planned.

The second barred from Iraq’s government even junior members of the former ruling Baath Party, essentially emptying the various ministries of the people who made the government operate.

Rumsfeld also oversaw the US invasion of Afghanistan in 2001 to oust the Taliban leaders who had harboured the al Qaeda leaders responsible for the September 11 attacks. As he did in Iraq two years later, Rumsfeld sent a small force to Afghanistan, quickly chased the Taliban from power and then failed to establish law and order.

US forces during Rumsfeld’s tenure also were unable to track down Osama bin Laden. The al Qaeda chief slipped past a modest force of US special operations troops and CIA officers along with allied Afghan fighters in the Afghan mountains of Tora Bora in December 2001. US forces killed him in 2011.

Critics argue that had Rumsfeld devoted more troops to the Afghan effort, bin Laden may have been taken. But as he wrote in “Rumsfeld’s Rules,” his compilation of truisms dating to the 1970s: “If you are not criticised, you may not be doing much.”

Another quote from “Rumsfeld’s Rules” was equally apt: “It is easier to get into something than to get out of it.”

Rumsfeld was known for his rollicking news conferences in which he sparred with reporters and offered memorable quotes.

Speaking in 2002 about whether Iraq would give weapons of mass destruction to terrorists, he said: “Reports that say that something hasn’t happened are always interesting to me, because as we know, there are known knowns. There are things we know we know. We also know there are known unknowns. That is to say, we know there are some things we do not know. But there are also unknown unknowns — the ones we don’t know we don’t know.”

“Stuff happens,” he told reporters in April 2003 amid rampant lawlessness in Baghdad after US troops captured the Iraqi capital.

During his time away from public service, Rumsfeld became wealthy as a successful businessman, serving as chief executive of two Fortune 500 companies. In 1988, he briefly ran for the Republican US presidential nomination.

Rumsfeld also served as a Navy pilot, US NATO ambassador and was elected to the US House of Representatives. He and his wife Joyce had three children.