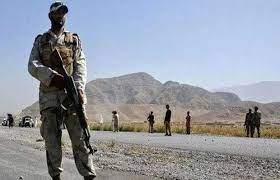 The War on Terror is still going on after a long time. Terrorism has not been completely eradicated from the country yet, because anti-peace forces are patronizing the terrorists. Terrorists carry out terrorist activities wherever they get a chance. Now, Balochistan province is their main target, where sporadic acts of terrorism continue. Four FC personnel have been martyred and eight injured in two recent terrorist attacks on FC personnel in Quetta and Turbat. Anti-state forces and elements backed by enemy intelligence agencies want to sabotage the peace and prosperity of Balochistan through such cowardly acts. However, the security forces are committed to thwarting the nefarious aims of such elements by sacrificing their lives.

At present, Pakistan is facing many internal and external enemies at the same time, and  some of them are conspiring against the development and prosperity of Pakistan from outside and some are trying to cause harm while staying inside Pakistan. Some elements in Pakistan also fall prey to the conspiracies of the enemy without understanding them and then try to set fire to their own house by becoming tools of the enemy. Our armed forces and intelligence agencies are keeping an eye on all such elements and the enemies who use them and are working at all times to thwart their conspiracies. The security agencies have the confidence and support of the nation  every step of the wy. And the nation also prays for the success of its zealous armed forces.

The Pakistan armed forces and people are committed to working together to tackle the global problem of terrorism. Chief of Army Staff Gen Qamar Javed Bajwa has reiterated his commitment to confront the scourge of terrorism by adopting an approach involving th whole of the nation. He said that resolving long-standing conflicts could lead to lasting peace and stability in South Asia and address complex challenges with meaningful and serious cooperation from the international community.

Pakistan’s military and political leadership have repeatedly drawn the world’s attention to the complex situation in the region. However, the international community, which is concerned with parochial interests, has been only talking about resolving the issues verbally. Mediation has also been offered, but in practice, no effective progress has been made so far.

Despite the disappointing attitude of the international community, Pakistan is striving for peace in the region, but India is adamant with its aggressive intentions, as it is backed by the USA and Israel. On the one hand, the USA is seeking Pakistan’s help in withdrawing from Afghanistan, while on the other hand, it is also strengthening India’s defense. As a result of this duplicitous policy, peace in the region is at stake.

The USA imposed its war on Pakistan yesterday and still does today. It is forcing Pakistan to maintain its monopoly in the region. The USA has never made a serious effort to compensate for the sacrifices made by Pakistan because the USA is well aware that its interests can be achieved by offering a little economic aid to Pakistan.

For the first time, Pakistan’s military and political leadership not only refused the US demand to Do More, but despite not providing the required cooperation, the country is ttusing all its resources to fight the enemy forces, the Pakistan Army has an everlasting history of sacrifices to eradicate terrorism and bring peace in the region, which is why the anti-peace forces occasionally conspire and mischief for their nefarious purposes, targeting the security forces.

The aim is to create instability in the region, but the Pakistani forces and the people together can cope well with the critical situation. The soldiers of Pakistan armed forces have written with their blood unforgettable stories for the defense and security of the motherland. Thanks to these sacrifices of the Armed Forces of Pakistan, the entire nation is proud of them.

The biggest goal of the Pakistan Army is to defend the country’s borders. The Pakistan Army has not only wiped out terrorists in its own country but has also shown a new way of life to those in need by sacrificing their lives in other countries. However, there is a need for us to create unity in our ranks and become a solid wall and resolve that no matter how hard the enemy tries, we will never allow the Pakistani forces to weaken.